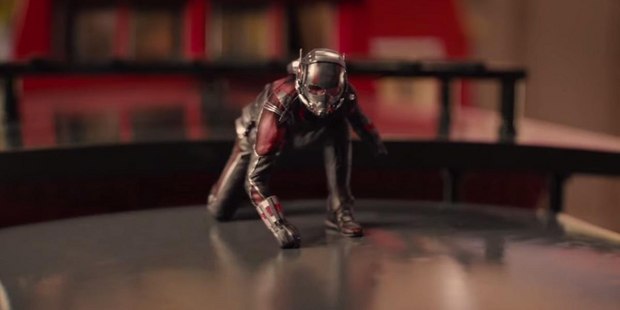 With the massive success of both The Avengers franchise and Guardians of the Galaxy, Marvel has now produced some of the highest grossing movies of all time. Of course, the Disney owned company is clearly eager to repeat that achievement, with more superhero films mapped out until 2019.

However, many years before the Marvel Cinematic Universe (MCU) films first came to fame with Iron-Man, there was Ant-Man. Initially considered as early as the 1980s, the idea for a movie based on the Ant-Man comics was confirmed at Marvel Studio’s first ever Comic Con panel in 2006. Now, almost a decade on, cinema goers finally get to see the final film.

Starring Paul Rudd, Ant-Man tells the story of con man Scott Lang, who embraces his inner hero with the help of a suit that gives him the ability to shrink to a minuscule size whilst increasing in strength. Working on the ever more important 3D version of the film was Prime Focus World (PFW), the company behind the 3D conversion of films including Avengers: Age of Ultron and Terminator Genisys.

Though no strangers to converting 2D superheroes into 3D, developing the stereoscopic look of a film with a main character of such diminutive proportions presented a new challenge for the PFW team, who had 582 shots to complete for the film. Luckily, they had the company’s patented, award winning stereo conversion pipeline, which incorporated Blackmagic’s Fusion Studio, to help. “We started Ant-Man at the end of Avengers,” begins senior stereo supervisor at Prime Focus World, Richard Baker. “Testing on a small scale began in February as we were still pushing through ‘Avengers’ and so we only really got going in earnest once that finished.”

For Baker, the biggest challenge of working on the film was how the stereo was going to play when Ant-Man shrinks down to his tiny size.

“Ant-Man was a really exciting project because even though we've worked on several Marvel productions now, Ant-Man presented us with some unique challenges,” he reveals. “We were working on look development with Marvel’s Stereographic 3D Supervisor Evan Jacobs, and had to figure out how best to play the stereo to enhance the photography. When Ant-Man is human-scale the camera is normal scale and normal height… but what happens when he shrinks? Is it still a full-scale camera, or does it become an Ant-Man sized camera in a huge environment? Does it shrink with him?”

Establishing just the right look meant that the stereo team had to experiment with how they would manipulate the depth when converting the film into the two slightly different left and right eye viewing angles needed to see an image as stereo 3D.

“Basically in stereo if something is positioned in a slightly incorrect place it’s probably going to look too large or too small, emphasizing its scale, so you can manipulate the appearance of how someone looks,” explains Baker. “We’ve had this come up on previous projects before. I worked on Frankenweenie a few years back and Tim Burton wanted Shelley the turtle to look huge when he turns into Turtle Monster, so through the course of the film we actually positioned him slightly out of place in depth to help emphasize his scale. In Ant-Man’s world when you’re tiny and looking at a scene from his point of view (POV) no more than one inch tall, you want the background to feel big, so our job was more about compressing the environment so that there wasn’t too much layering and internal depth to it compared to the character, flattening it to make it appear far larger.” To help perfect this 3D aesthetic, artists at PFW work with a host of in house tools as part of the company’s advanced 2D to 3D stereo conversion process, called View-D. DepthGen, for example, allows for cleaner results in stereo by improving on any discrepancies caused by the shift between the left and right eye at a sub pixel level. Another tool, AssistedBreakout provides a semi-automated way of simplifying the comps that we receive from VFX vendors, allowing specific elements to be extracted more easily for the conversion process.

An important component in this pipeline is Fusion Studio. “We build lots of proprietary stereo tools in the development of our stereo pipeline, and we appreciate how well organized Fusion is for developers, providing a stable SDK, without the need to recompile plugins for every new release,” tells Baker.

The advantage Fusion gives to PFW isn’t just the stable SDK, though. “Fusion’s fast, light and gives us precise control in 3D, allowing us to make lots of very fine adjustments, which is exactly what we need for our stereo work,” Baker continues. “I think one of the great things about Fusion is the way it handles large amounts of roto because in conversion, everything in our pipeline is rotoscoped. Fusion just processes all of that large data and it means the artist has more interactivity frame by frame, so it makes the whole project more workable overall.” Aside from a few CG shots, which were rendered as stereo directly by the visual effects facilities involved, Ant-Man was fully stereo converted, and Baker affirms that this combination is increasingly becoming more and more normal for developing features into stereo 3D. In fact, though there are some in the industry who might say that the 3D version of a film should be shot natively in stereo on set for the best results, Baker -- who has been working at PFW since the days when stereo conversion was a completely new business -- believes otherwise.

“Shooting native absolutely doesn’t mean that it is ‘true’ stereo. It’s just a different way of capturing stereo, in the same way that rendering out CG stereo in Maya, or converting the film afterwards are ways of creating stereo. It’s an optical illusion at the end of the day,” he says. “I think for certain projects like nature documentaries, for instance, native is great, but from a production point of view shooting native on big tent pole visual effects films just doesn’t make any sense. When you’re on a shooting schedule of twelve or sixteen weeks to shoot an entire film then the slowdown of shooting native stereo on the day is too much.”

“Another problem comes when you’ve got many visual effects,” Baker continues. “If you’ve got just one character on a green screen, how do you know how to shoot it in native as there’s nothing there! Only when the shot comes into VFX and you build the world behind the character do you begin to see how the composition comes together. That’s when you can start to think about how to develop that in stereo 3D. There are all these choices for things you can make afterwards in post that if you were shooting native, you wouldn’t be able to change. That’s one of the nice aspects of what we’re able to offer to the client.”

As for Ant-Man, Baker is looking forward to seeing how audiences react to the fun and playfulness the latest Marvel installment will bring. “What I love about Marvel is they bring humor into their films,” he concludes. “For instance in Ant-Man, there’s this great scene where Ant-Man’s fighting with his enemy Yellowjacket. They’re on a toy train track and running along the roof of the train, battling away with each other, and Ant-Man’s got his ant friends who help him. Then in the last shot, the train hits Yellowjacket and falls off the train track, and this epic battle just becomes a fallen toy. Those kinds of things are funny, and it makes Marvel films really fun to work on too. They embraced that on Guardians of the Galaxy, taking a different tack there which people loved, and I’m happy they’ve continued.”