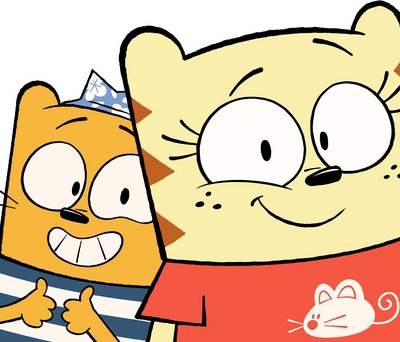 PARIS, FRANCE -- Federation Kids & Family and sister production company Cottonwood Media have announced two new pre-sales of their animated preschool series The Ollie & Moon Show (52 x 11) to Discovery Kids Latin America and TVO Canada. The new agreements will position The Ollie & Moon Show in 25 more countries, including all the Americas and most English speaking markets. Other pre-sales of the show include an A-list of international channels, including France Television (France) and NBC Sprout (US).

David Michel, Producer and Co-Founder of Federation Kids & Family and Cottonwood Media, added, “We couldn't find better homes for The Ollie & Moon Show. Discovery Kids and TVO mean high end, quality programing that brings out the curiosity in kids - and this is exactly what our show is aiming for!”

The Ollie & Moon Show features a couple of curious, globe-trotting cats who drag their upper-preschool audience with them on their travels around the world introducing them to serendipity, the joys of unlikely friendships, and global citizenship. Kids are immersed in vivid adventures around the world – with all the fun that comes from discovering new food, language, cities, customs, and friends. Designed to show kids the world in a funny and engaging way, The Ollie & Moon Show is edutainment at its very best.

Flavio Medeiros, Director of Programming and Acquisitions for Discovery Kids Latin America added, “The Ollie and Moon Show falls right in line with Discovery Kids’ mission to provide high quality programs that not only entertain but also educate children in a fun and engaging manner. Moreover, the show teaches children the value of diversity, tolerance and cultural differences, which are important components of the world our young viewers live in today.”

“We are so thrilled that our two little cats have opened the door to these great broadcasters,” commented Monica Levy, Senior Vice President, Co-Production and Sales, Federation Kids and Family. “This really is a case of the perfect pairing of content and platform.”

Using a unique mix of animation (cats) and live action (backgrounds) The Ollie & Moon Show is based on the best-selling book series created by author and illustrator Diane Kredensor. Kredensor is an Emmy Award-winning artist, director and producer whose credits include Pinky and the Brain, Clifford the Big Red Dog and Word World, among others. The series was developed in collaboration with Kredensor by Robert Vargas (Word World, Wonderpets, Zack & Quack, and Henry Hugglemonster), and David Michel (Totally Spies!, Get Blake and Rekkit Rabbit). Kredensor also serves as creative producer. Delivery is planned for a 2017.