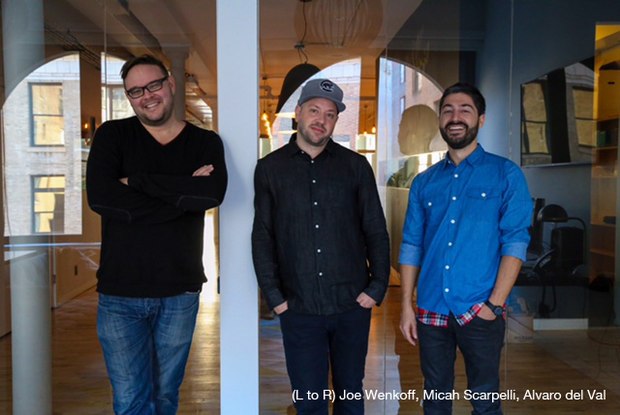 NEW YORK -- Editor Micah Scarpelli, who’s made his name working with brands such as Mercedes-Benz, Subway, Reebok, Gillette and Volvo, has officially opened the doors to his own full-service, New York City-based editorial/post-production company, Uppercut.

With an eye-catching space that features several editorial and Flame suites among other post-production offerings, Uppercut is also emphasizing its full-service capabilities with the addition of Joe Wenkoff, who brings over 20 years’ worth of VFX/post experience and will serve as partner and creative director of visual effects including finishing and color correction. During his lengthy career, Wenkoff has served as a Flame artist, compositor and VFX supervisor for a host of talent and brands such as Volvo, Nike, AT&T, Budweiser and M&M’s.

In addition to Scarpelli and Wenkoff leading the operation, Uppercut has also added more editorial firepower with the hiring of Alvaro del Val, who arrives in New York City after spending the last three years as a senior editor at Madrid/Dubai-based production studio, Serena. During his time there, del Val cut campaigns for global clients including McDonald’s, Nestle, Toyota, Nissan and Mercedes-Benz. His extensive experience in the automotive sector fits in perfectly with his new role as editor at Uppercut, which counts Volvo North America as a top client.

According to Matt O’Rourke, executive creative director on the Volvo account at Grey New York, “Uppercut has been a true partner to us. The volume of work we do with them is staggering, and yet it never feels difficult. Micah and his entire team have a true, deep dedication to their craft, and working with them is one of the best parts of my job.”

After spending the majority of his career working at large editorial/post companies, Scarpelli’s opening of Uppercut allows him and his team to work in a more intimate, boutique-style environment built around a “grassroots” mindset.

“A small, independent shop has huge advantages, we have the freedom to care for our clients and projects,” commented Scarpelli. “I’m very selective about the people on my team, so we can offer the best client experience.”

As Uppercut sets its sights on bolstering its roster with a diverse cross section of talent, Scarpelli’s solid reputation in the commercial field has helped his new company maintain healthy, long-term partnerships with well-known agencies such as MMB.

Fred Bertino, president/chief creative officer of MMB, attests to Scarpelli’s standing in the industry, saying, “Micah has been one of our ‘go-to’ editorial partners for top clients since we opened our doors. He’s talented, always willing to help, and always has a strong point of view that challenges us and makes the work better. With his new venture Uppercut, we look forward to continuing our relationship and doing more great work together.”