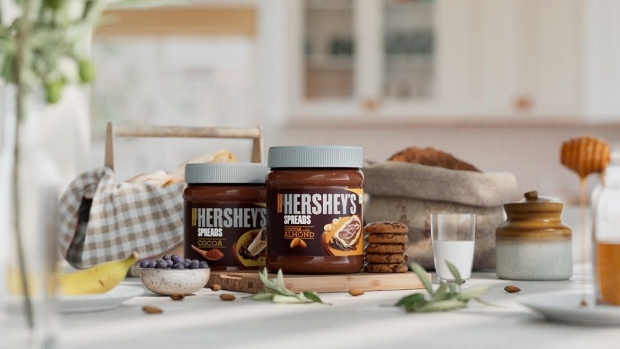 Mumbai-based Post Office Studios has created a promotional video for Hershey’s new packaging on two of its spreads, ‘Cocoa’ and ‘Cocoa with Almond.’ The studio’s collective of designers, animators and visual effects artists conceptualized an engaging visual to communicate the change and to create excitement and buzz among its consumer-base.

The studio showcased the transition from old to new package design; the spot zooms into packaging contents like swirls of chocolate, almonds, and cocoa powder. The viewer sees the chocolatey confection spread onto a piece bread, then the new package design appears levitating in a creamy, rich chocolate swirl before settling down on the table at the conclusion of the mouthwatering chocolate journey.

3D animation software like Cinema 4D and Octane Render were used to create elements providing an authentic touch to the product; the chocolate swirl was created with fluid simulations in Houdini. The Photo Scanning technique was also applied to make the creative production culturally and geographically specific.

“Chocolate is always mouth-watering - be it in real life or on the screen in ‘reel’ life,” shared Post Office Studios senior creative director Harsh Sharma. “We understood the brand’s precise requirement and seized the opportunity. The idea was to reveal the new packaging through a spectacular film. Creating visuals of luscious chocolate dishes proved to be more exciting than we could imagine. Using a perfect blend of photorealistic visuals and surreal renders, we conveyed the brand message in a simple, strong, yet tempting way.”

Post Office Studios specializes in motion design, cel animation, and VFX. Its team of designers and animators are passionate about turning ideas into motion by testing limits and breaking traditional creative boundaries with novel approaches and cutting-edge technologies.