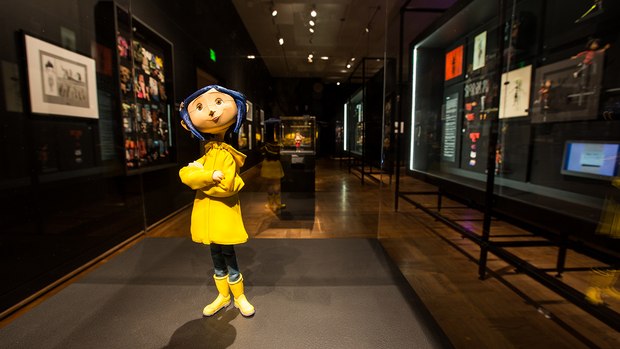 The Portland Art Museum and Northwest Film Center feature ‘Animating Life: The Art, Science, and Wonder of LAIKA’ through May 20.

PORTLAND, ORE. -- The Portland Art Museum and its Northwest Film Center celebrate Animating Life: The Art, Science, and Wonder of LAIKA, a groundbreaking view behind-the-curtain into the visionary artistry and technology of the globally renowned animation studio.

In its opening week, the exhibition has begun garnering praise from local and nation media as well as from visitors who have taken to social channels to show support and enthusiasm. The exhibition opened Oct. 14 and runs through May 20.

“The partnership with LAIKA and the energy it brings to the Museum is very special. We are thrilled with the initial response to the show and in particular the opportunity for our community to learn more about this significant and dynamic art form and the artists behind it,” said Portland Art Museum Executive Director Brian Ferriso.Sharing the sentiment, LAIKA CFO and SVP of Business Operations Brad Wald, said: “Everyone at LAIKA is honored by the early response to

Animating Life: The Art, Science and Wonder of LAIKA at the Portland Art Museum. We are truly inspired by the public’s enthusiasm and are particularly thrilled to see so many out-of-state and international fans in attendance for what has been such a joyous collaboration for us with PAM.”

At the heart of every LAIKA film are the artists who meticulously craft every element. Through behind-the-scenes photography, video clips and physical artwork from its films, visitors are immersed in LAIKA’s creative process, exploring the production design, sets, props, puppets, costumes, and world-building that have become the studio’s hallmarks. Their films are a triumph of imagination, ingenuity and craftsmanship and have redefined the limits of modern animation.

“Portland Art Museum and Northwest Film Center are thrilled to partner with LAIKA to present the wonders of this distinct enterprise,” said Ferriso. “LAIKA at its core is an artistic endeavor that embraces the past and infuses it with a 21st-century vision. LAIKA’s aesthetic vocabulary continues to be shaped by the people and uniqueness of this special state.”

Established in Portland in 2005, LAIKA has produced four Oscar-nominated features, including Kubo and the Two Strings (2016), The Boxtrolls (2014), ParaNorman (2012) and Coraline (2009). Among LAIKA’s many accolades is a 2016 Scientific and Technology Oscar for its rapid prototyping system, which uses 3D printers to revolutionize film production. Through technological and creative innovations, LAIKA is devoted to telling new and original stories in unprecedented ways.

“We believe storytelling is an important part of who we are,” says Travis Knight, President & CEO of LAIKA and the director of its most recent award-winning film, Kubo and the Two Strings. “LAIKA embraces our great privilege to tell stories by creating films that bring people together, kindle imaginations and inspire people to dream. We are proud to showcase our creative process through this partnership with the Portland Art Museum, one of the country’s greatest art institutions, and the Northwest Film Center. Art in its finest forms speaks to our shared humanity, opening us up to new ways of thinking and feeling and helping us to recognize the hidden connectivity of all things. With this exhibit, LAIKA, PAM, and the Northwest Film Center have created something that can be part of that communal process of change and connection.”

During the course of the exhibition the Northwest Film Center will present wide-ranging programming showcasing the studio’s work and surveying the evolution of stop-motion animation since before the turn of the 20th century. Along with film exhibition programming, the Center will offer a range of animation classes, workshops, and visiting artist programs for students, artists, families, and community members of all ages, including exhibition offerings in its Global Classroom screening program for high school students.