Portfolio Entertainment, Giggle Media to Develop ‘Invasion of the MooFaLoo!’ for Teletoon

Created by created by Steve Garratt, animated co-production comes hot on the heels of Portfolio-produced ‘Freaktown.’ 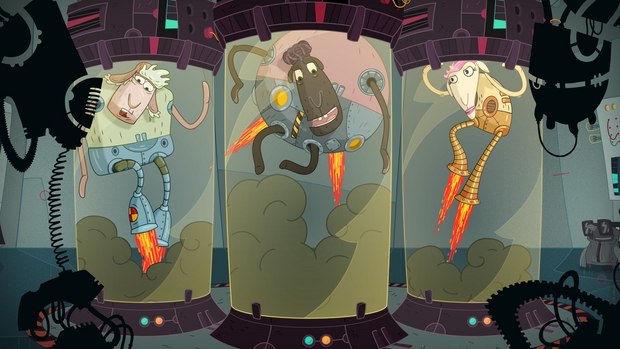 TORONTO -- Portfolio Entertainment and U.K-based Giggle Media have announced a development deal with Corus Entertainment’s TELETOON for a new comedy animation series, Invasion of the MooFaLoo! The kids 6-11 co-production comes hot on the heels of Portfolio-produced Freaktown, an upcoming series commissioned by TELETOON.

Invasion of the MooFaLoo!, created by Steve Garratt, follows three genetically-modified, rocket-powered sheep, Fluffy, Byron and Telisa, as they fight to protect the world from the MooFaLoo, a race of alien monk cows who conquer planets with their duck-shaped battleships.

“We are thrilled to be working on another animation series for TELETOON, this time with an extraordinary flock of defiant sheep and marauding cows,” said Lisa Olfman, CEO and Co-Founder, Portfolio Entertainment. “We are also pleased to be joining forces with U.K. based Giggle Media on this series which speaks to Portfolio’s continued strength in identifying the right animation partners, nationally and internationally, and collaborating with top talent from around the globe.”

“Invasion of the MooFaLoo! is an absurdly random and funny series bursting with colorful and comical characters,” said Athena Georgaklis, Director of Content, TELETOON. “We look forward to developing this series with Portfolio and Giggle Media and bringing this concept to life.”

“To make a show like Invasion of the MooFaLoo! really work you need creative collaborators who live and breathe kids’ comedy,” said Steve Garratt, Creator & Creative Director of Giggle Media. “That’s what we found at Portfolio and TELETOON.”