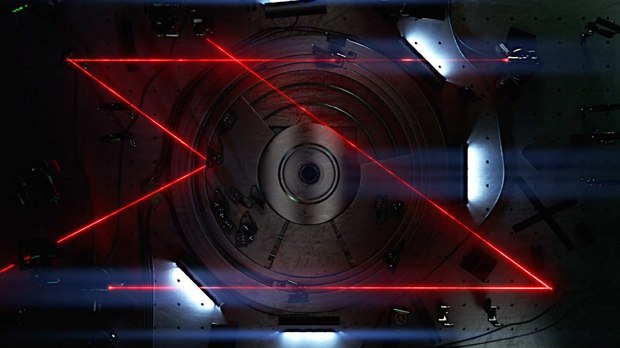 Director's Statement -- After hearing the music track for the first time, the production for this video started out as a simple test for Polynoid  director Jan Bitzer to check out the effects  of lasers bouncing off of mirrors in a physics  lab-like environment.

After playing with the setup for a while, we started to animate a sequence, starting from the beginning of the track. This turned out to be a point-of-no-return moment, since after a couple of days of 'fun with lasers' it was already too late to stop.  While plowing through some 7,800 frames of animation with only a pre-defined table of mirrors and lasers, the characteristics of the final video developed throughout the process of creating it. Nothing was pre-planned, designed or thought-through in advance. So when around frame 4,125 the beer-infused idea popped up to drop  a heart onto  the table, that's what it was. From there on, the heart was lying there and we worked with that.

As a true passion project, the video was produced on the side next to the commercial jobs in our pipeline. So it took quite a while to finish, but we're happy with the way it turned out and functions as a film supporting the music.

The project was created in Softimage, rendered with Solid Angle’s Arnold and composited in Nuke. The most demanding aspect was probably the length and amount of frames of a continuous, one-shot sequence to be handled in animation, rendering and compositing.