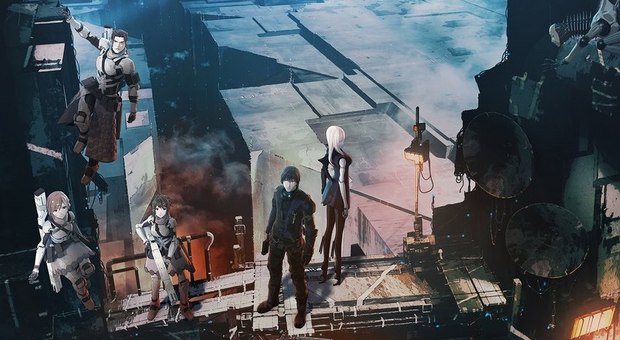 Tokyo-based animation studio Polygon Pictures has announced that its anime feature adaptation of BLAME!, the debut manga series from Knights of Sidonia creator Tsutomu Nihei which begins its two-week limited theatrical engagement in Japan on May 20, has been officially selected to be screened at Annecy 2017.

The world's premier animated film festival, the Annecy International Animated Film Festival will be held June 12-17 in Annecy, France. BLAME! is scheduled to be shown from 8:30 p.m. on Friday, June 16, at the Bonlieu Grande Salle (945 person capacity). Directed by Hiroyuki Seshita, BLAME! was originally serialized in Kodansha’s Afternoon magazine from 1997 to 2003. The film is set in a dark future where humanity faces purges and extermination, and a wanderer named Killy must carry out a solitary, dangerous mission through a mammoth multi-leveled “city” that continues to expand forever. BLAME! creator Nihei served as creative director for the film, handling script and character design, with the animation produced by Polygon Pictures, known for its award-winning work on shows such as Star Wars: The Clone Wars and Transformers Prime, as well as the epic Knights of Sidonia series.

“The Annecy Festival is pleased to present BLAME! on the large screen,” said Annecy artistic director Marcel Jean. “This is certainly the best animated science fiction feature we've seen in recent years. I was caught up in the force of the story from the first minute. This film is a classic to be!”

In a future where technology has run rampant, humanity’s only hope rests on a lone wanderer. An “infection” in the past has caused automated systems to spiral out of order, resulting in a multi-leveled city structure that replicates itself infinitely in all directions. Now humanity has lost access to the city’s controls, and is hunted down and purged by the defense system known as the Safeguard. In a tiny corner of the city, a little enclave known as the Electro-Fishers is facing eventual extinction, trapped between the threat of the Safeguard and dwindling food supplies. A girl named Zuru goes on a journey to find food for her village, only to inadvertently cause doom when an observation tower senses her and summons a Safeguard pack to eliminate the threat. With her companions dead and all escape routes blocked, the only thing that can save her now is the sudden arrival of Killy the Wanderer, on his quest for the Net Terminal Genes, the key to restoring order to the world.