Feature adaptation of the debut manga series from ‘Knights of Sidonia’ creator Tsutomu Nihei begins two-week limited theatrical engagement in Japan on May 20, 2017. 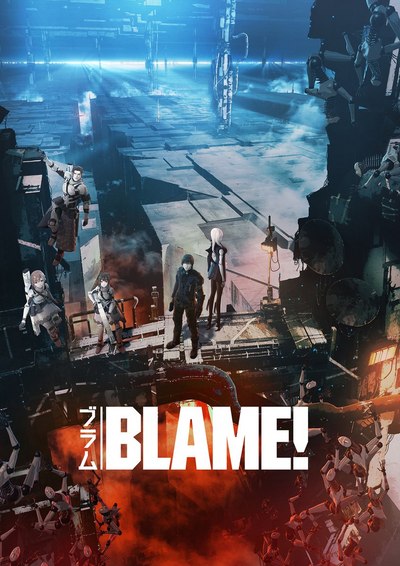 Tokyo-based animation studio Polygon Pictures has announced the release date in Japan for the anime feature adaptation of BLAME!, the debut manga series from Knights of Sidonia creator Tsutomu Nihei originally serialized in Kodansha’s Afternoon magazine from 1997 to 2003.

BLAME! will begin its two-week limited theatrical engagement in Japanese cinemas nationwide on May 20, 2017. In the lead-up to its release, a brand-new trailer and poster for the film have also been unveiled, as well as details about the creative team and voice cast.

Directed by Hiroyuki Seshita, BLAME! is set in a dark future where humanity faces purges and extermination, and a wanderer named Killy must carry out a solitary, dangerous mission through a mammoth multi-leveled “city” that continues to expand forever. BLAME! creator Nihei served as creative director for the film, handling script and character design, with the animation produced by Polygon Pictures, known for its award-winning work on shows such as Star Wars: The Clone Wars and Transformers Prime, as well as the epic Knights of Sidonia series.

In a future where technology has run rampant, humanity’s only hope rests on a lone wanderer. An “infection” in the past has caused automated systems to spiral out of order, resulting in a multi-leveled city structure that replicates itself infinitely in all directions. Now humanity has lost access to the city’s controls, and is hunted down and purged by the defense system known as the Safeguard. In a tiny corner of the city, a little enclave known as the Electro-Fishers is facing eventual extinction, trapped between the threat of the Safeguard and dwindling food supplies. A girl named Zuru goes on a journey to find food for her village, only to inadvertently cause doom when an observation tower senses her and summons a Safeguard pack to eliminate the threat. With her companions dead and all escape routes blocked, the only thing that can save her now is the sudden arrival of Killy the Wanderer, on his quest for the Net Terminal Genes, the key to restoring order to the world.

Killy the Wanderer, on his quest to find the Net Terminal Genes, will be voiced by Takahiro Sakurai; Cibo, the scientist who helps Killy on his mission, by Kana Hanazawa; Zuru, the girl whose village is threatened with extinction, by Sora Amamiya; Pop, the leader of the Electro-Fishers who protect the village, by Kazuhiro Yamaji; Sutezo, an Electro-Fisher and Pop’s right-hand man, by Mamoru Miyano; and Tae, young Electro-Fisher and Zuru’s closest friend, by Aya Suzaki.

Advance tickets go on sale starting February 25th. The tickets will be bundled with a first-round bonus gift of original large-size BLAME! stickers, while supplies last. Participating cinemas can be found at blame.jp/theater.