13 all-new episodes feature our tiny heroine - with magical shrinking powers - and friends Shani and Lila embarking on adventures big and small as they explore the world outside of Littleton; watch exclusive ‘Polly's Putt Putt Pets’ clip. 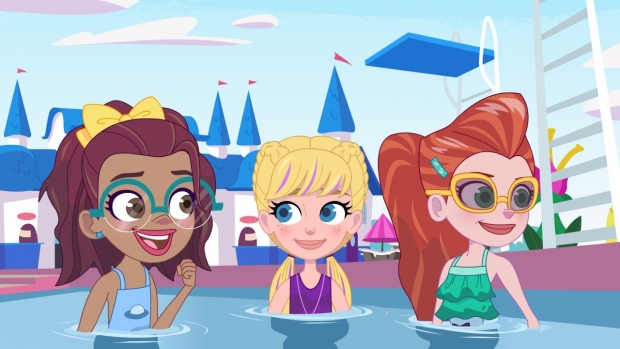 A new set of 13 episodes from Season 3 of Mattel Television and WildBrain’s Polly Pocket animated series premieres Sunday, January 9, on Netflix in the U.S., and we’ve got an exclusive clip, “Polly's Putt Putt Pets,” that shares a fun glimpse of what’s in store. The first episodes in Season 3, Polly Pocket Season 3: Rainbow Funland Adventures, are currently streaming on Netflix in the U.S.

In Polly Pocket Season 3: Magic Locket Adventures, Polly, the tiny heroine with a magical locket and amazing shrinking powers, leaves the Funland amusement park behind for the exciting allure of new adventures; these all-new episodes find Polly, with friends Shani and Lila embarking on adventures both big and small as they see everything the world outside of Littleton has to offer.

Polly and friends take the tiny fun to magical heights and the adventures to new destinations! From fighting pollution at a local lake to getting sucked into a video game and helping out at a very special synchronized swimming event, Polly is ready to dive into the deep end. There's nothing Polly, Shani and Lila can't accomplish with a little creativity, determination, and the magic of tiny power!

In AWN’s exclusive clip, “Polly's Putt Putt Pets,” Polly and Shani open a pet hotel - on the same day of Mom’s big work mini-golf open house! Sure that she has everything under control, Polly takes the pets to the putt-putt course and loses them among the chaos. Polly and Shani must find the pets and ensure Mom’s big day goes off without a hitch.

In addition to celebrating Polly Pocket’s core theme of the littlest person can make the biggest change, Polly Pocket Season 3: Magic Locket Adventures supports young female friendships with the theme that girls can be capable, courageous, and tenacious.

According to Christopher Keenan, Senior VP, Creative & Executive Producer, Mattel Television, “As Polly and her friends continue to brave new worlds on all-new adventures, more and more kids across the globe get to join Polly, Shani and Lila as they encounter surprises both big and small. With Magic Locket Adventures, we get to continue the story from Rainbow Funland Adventures as the crew from Littleton showcase their creativity, compassion, and determination.”