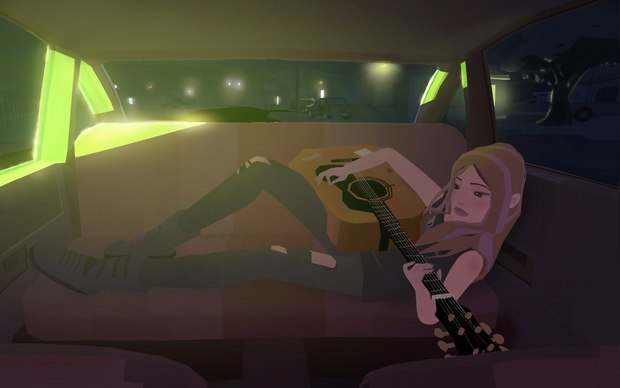 SAN FRANCISCO -- Pollen Music Group is at the forefront of the burgeoning VR industry with their groundbreaking work in songwriting, score composition, sound design and the creation of immersive music/sound mixes. For the now Oscar-nominated animated short film, Pearl from director Patrick Osborne and Google Spotlight Stories, Pollen Music Group’s principal composers Alexis Harte, JJ Wiesler and Scot Stafford wrote the song that anchors the short -- “No Wrong Way Home” -- and also produced the score and sound design while breaking new ground with a 360°/Ambisonic mix.

Set inside their home, a beloved hatchback, Pearl follows a girl and her dad as they crisscross the country chasing their dreams. It’s a story about the gifts we hand down, their power to carry love…and finding grace in the unlikeliest of places. In the film, “No Wrong Way Home” is performed by Nicki Bluhm and Kelley Stoltz.

About the collaboration, Pearl director Patrick Osborne said, “Pollen were the perfect partners in my search for the musical brilliance for Pearl. Their impeccable taste, talent, and circle of collaborators made the process of shaping ‘No Wrong Way Home,’ the emotional core of the film, an absolute joy. Plus, you couldn’t meet a nicer group of guys.”

Harte, Wiesler and Stafford added, “These latest accolades are a tremendous honor we are excited to share with an incredibly talented group of storytellers, animators, producers and technologists led by Patrick Osborne.” Jan Pinkava, the Academy Award-winning Creative Director of Google Spotlight Stories, offers, “Pollen made Pearl possible. Where else could you find, in one place, such knowledge, craft, talent and uncompromising commitment for the best sound and music? At its heart, Pearl is the original song by Alexis Harte and JJ Wiesler. From the sensitive collaboration with the director, crafting words and music, through the selection of artists, the recording and production, to the innovative spatial rendering, creating an experience that truly moves audiences; Pollen did it all flawlessly.” From its inception, Pearl was conceived as a music-driven film, so the team knew the song and score needed to propel the narrative along with the visuals. As Pollen worked closely with the Google Spotlight Stories team to create several versions of the film simultaneously – for 2D/theatrical, VR, 360, Mobile – they found the music had to flow from scene to scene and move from stereo to spherical sound seamlessly in a way that served the story first. The location recordings, sound design and atmospheres are all mixed in three dimensions using an audio pipeline and custom software designed specifically for Google Spotlight Stories. The basis of this workflow is Ambisonics, a full-sphere surround sound technique.

The Pollen team also just won an Annie Award for Pearl for Outstanding Achievement in Music for an Animated TV/Broadcast Production from the International Animated Film Society, ASIFA-Hollywood. They were also recently nominated by the Motion Picture Sound Editor’s (MPSE) Golden Reel Awards for Pearl in the category of Special Venue and recently won the 2016 Proto Award for Best Original Score.

Pearl will be showing in theaters around the world starting Friday, February 10th as part of ShortsHD and Magnolia Pictures presentation of THE OSCAR NOMINATED SHORT FILMS 2017. The films will play in over 500 screens across the United States, Canada, Europe and Latin America. Pearl can also be seen in VR and 360 for free via YouTube, iTunes, Google Play and VR on Vive.

Another version of the song “No Wrong Way Home” is also available on Alexis Harte’s album, A Perfect Waste of Time. Both the song and Harte’s album are in regular rotation on terrestrial and satellite radio stations around the country, including Sirius XM’s Acoustic Café and San Francisco’s KFOG.