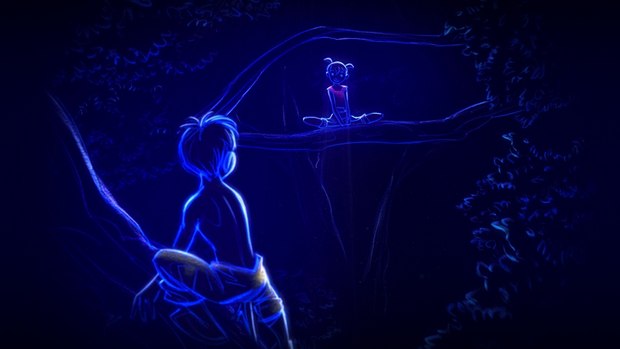 Duet is the third such music project by Pollen for Google’s cutting-edge Spotlight Stories on the Moto X phone. The first two, Windy Day and Buggy Night, proved that smartphones can be used to create fully-formed, 3D interactive worlds. Duet is the first hand-drawn film in the immersive film series in which viewers can “pan” around virtual movie sets as the story plays out.

“Scot Stafford may be the most versatile composer I have ever worked with,” says Keane. “He and his team at Pollen Music Group are pioneers. They lift high their craft and deliver not only virtuoso writing and talent, but are able to collaborate on the highest technical level imaginable. What Scot did for Duet is nothing short of miraculous.”

Duet exemplifies Pollen's focus on experimentation and innovation. For instance, they created two scores for the short: an interactive version for the smartphone experience, which places the tools of a filmmaker into the viewer’s hands; and a theatrical version.

According to Pollen principal/composer Scot Stafford, his team took an unusual approach to pitching the musical relationship. Pollen put together 12 original sketches on spec, all of which involved live musicians. Then Keane, his son Max, and Rim were invited into their San Francisco studio to hear all of the options. The result, says Stafford, “was a creative process that felt very organic and natural.”

“Glen is an incredibly musically sensitive person,” explains Stafford, who has scored all three of the Spotlight Series films. “He brought a lot of ideas to the table. Our solution was to have a recording session where we allowed a ‘conversation’ to happen between the musicians and Glen directly. His animation is so musical and lyrical that we just followed the lines in his drawings. It was a true collaboration.” The final score was recorded and mixed at the legendary Skywalker Sound with the Cypress String Quartet and other hand-picked musicians from around the world.

In addition to the Google Spotlight Stories series, Pollen’s music has recently appeared in a number of broadcast spots for Nature Valley via ad agency McCann, and is featured in flagship mobile devices and creative applications from Apple and Adobe. Upcoming projects include custom sound design for Dolby Laboratories and national spots for top General Mills brands.

Specializing in music for film, TV and advertising, as well as audio branding, Pollen's diverse collective of international artists can easily reconfigure and integrate their talents based on the needs of a project, says Principal/Composer Alexis Harte, a critically acclaimed singer-songwriter and nationally touring performer, who signed a multi-year co-publishing deal with Lionsgate Films and has had his music appear in dozens of TV shows and international ad campaigns.

“We have complementary skillsets and it’s evidenced by the range of work that we do,” explains Harte, who co-founded Pollen with Stafford and fellow principals/composers JJ Wiesler and Dave Lebolt in 2010. “That’s really the meaning behind our name Pollen: the idea that it’s responsible for spreading life everywhere, and that we’re almost like worker bees. Each coming with our personal talents and responsibilities, but adding and supporting the larger whole in a more meaningful way. It’s the cross-pollination of our talents.”

“I think we’re uniquely positioned as a 360-degree creative music agency,” adds Wiesler, an award-winning composer, record producer and engineer, who scored the HBO series “On Freddie Roach (with Zach Rogue) and the theme song to Discovery Channel’s “Naked After Dark,” and has consulted with some of world’s leading music brands such as Universal Audio, Avid, and Dolby. “We know it often requires an all-of-the-above approach, and we’re eager to meet those challenges as authentically as we can. We’re not trying to pretend to be someone that we’re not. That’s why we love drawing on our individual backgrounds when appropriate or supporting other artists and getting them involved in our efforts.”

“Experientially, we know how to work well with large client teams with our extensive entertainment and business accomplishments, but we also know how to do it in a handmade way,” concludes Dave Lebolt, an Oscar and Clio Award-winning composer, multi-instrumentalist and technologist, who has served as VP of Applications Product Marketing at Apple, CTO of Avid Technology and General Manager of Digidesign, and recently scored for the Amazon TV series “Alpha House.” “We can speak their language from both the creative and business sides. Ultimately, we see ourselves as a boutique with artistic connections at the highest possible level.”

Rounding out the Pollen team is Amy Sheldon who joined as principal/Executive Producer in 2011. A co-founder of the duotone audio group, Sheldon brings 20 years of experience in film, TV and advertising production working on commercials with the likes of Verizon, Bacardi, Nike, Microsoft, Coca-Cola, Revlon and Samsung; TV series for network clients ABC and AMC; as well as several films.