Latest animated feature from indie king Bill Plympton and Jim Lujan playing at the IFC Center in New York August 3-9 followed by a one-week engagement at the Laemmle Monica in Los Angeles. 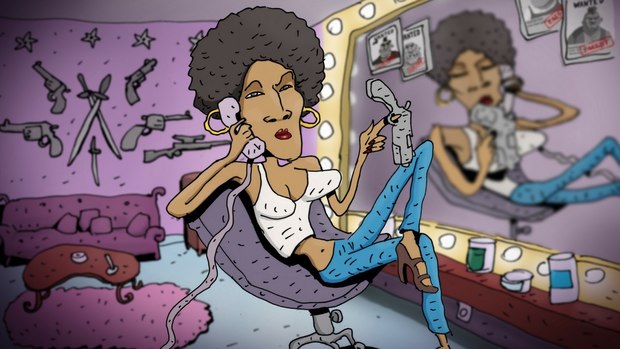 Fans of independent animation in New York City are in for a treat with screenings of Revengeance, the latest animated feature from indie king Bill Plympton and Jim Lujan.

Revengeance will play for one week -- August 10-16 -- at the Laemmle Monica, 1332 2nd Street in Santa Monica, CA. Co-directors Plympton and Lujan will appear in person at the evening shows on opening weekend. (Get showtimes and tickets here.)

Starring, written and directed by Lujan and produced and directed by Plympton, Revengeance follows a low-rent bounty hunter named Rod Rosse, The One-Man Posse, who gets entangled in a web of danger when he takes on a job from an ex-biker, ex-wrestler turned U.S. senator named Deathface. Sight & Sound magazine called the film an “unbridled, caustic, grotesquely comic vision of America that feels particularly timely.”

-- Read Plympton and Lujan Bring a Tale of ‘Revengeance’ To Kickstarter, only on AWN! --