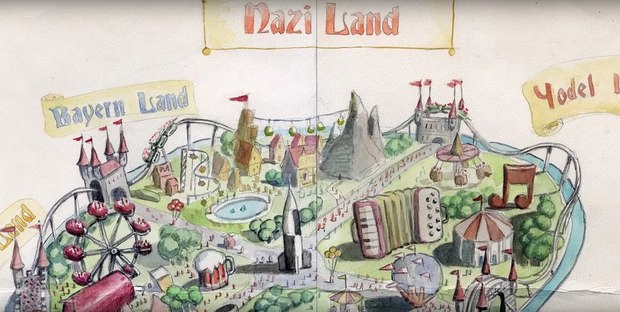 Plymptoons has unveiled a new trailer and poster for Bill Plympton’s new mockumentary feature, Hitler’s Folly, billed as “a merciless satire” in which Adolf Hitler is reimagined as a successful animator and artist.

From Academy Award-nominee Plympton, Hitler's Folly explores what might have happened if Adolf Hitler's art career had been more successful and instead of becoming an evil dictator, he was inspired to become an animator like Walt Disney.

You can watch the new trailer in the player below:

Completely written, directed, designed and animated by Plympton, long-considered the “king of indie animation,” Hitler’s Folly will be released for free download at www.plymptoons.com on Friday, June 3.

A New York premiere of the film is will be held on Wednesday, June 1 at 7:00pm at the SVA Theater (333 W. 23rd Street), followed by a Q &A with Plympton. After the screening, Plympton will also do special live drawings of a character from the film for interested fans. The screening is free and open to the public, but an RSVP is required for admittance via follyrsvp@gmail.com (link sends e-mail), and seating for the event is strictly on a first-come, first-served basis.

Since 1991, Plympton has made eleven feature films. Eight of them, The Tune, Mondo Plympton, I Married a Strange Person, Mutant Aliens, Hair High, Idiots and Angels, Cheatin' and Revengeance are all animated features. Plympton has also collaborated with Madonna, Kanye West and Weird Al Yankovic in a number of music videos and book projects. In 2006, he received the Winsor McCay Lifetime Achievement Award from The Annie Awards.

In 1987, Plympton was nominated for an Oscar for his animated short, Your Face. In 2005, he received another Oscar nomination, this time for his Guard Dog short. Push Comes to Shove won the prestigious Cannes Palme d'Or in 1991, and, in 2001, his short film Eat won the Grand Prize for Short Films at Cannes Critics’ Week.