Plympton’s ‘Loneliest Stoplight’ is Lonely, and Now You Can Be Lonely Together at NYCC 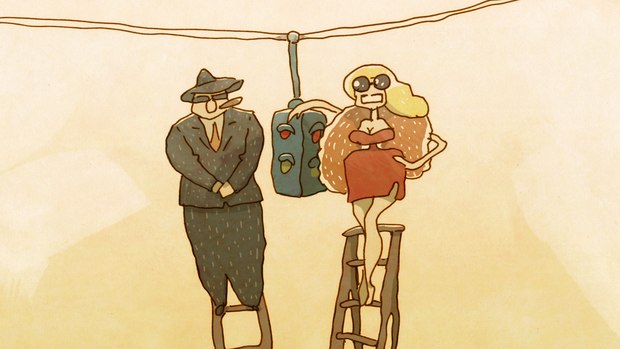 NEW YORK -- After a successful film festival run, Oscar-nominated independent animator Bill Plympton will be releasing an exclusive Blu-ray disc featuring his latest multi award-winning short, The Loneliest Stoplight, narrated by Patton Oswalt. The hand-drawn short follows the ups and downs of “life” as a traffic light at an infamous intersection. The film was “Highly Commended” and screened theatrically with the 2016 Oscar Nominated Animated Short Films earlier this year.

The first 100 fans (each day) to visit the Bill Plympton Studio booth (#2944) can own a limited edition copy of BILL PLYMPTON IN HD Featuring The Loneliest Stoplight (an NYCC exclusive).

Bill Plympton and producers Adam Rackoff and James Hancock will be on-hand to sign copies of the exclusive Blu-ray which also features a selection of Plympton’s most iconic shorts, animations, clips, and trailers -- all available for the first time in high definition.

“The Academy of Motion Picture Arts and Sciences just finished preserving my two Oscar nominated short films, Your Face and Guard Dog,” Plympton said. “These films were finished on film, but the 35mm negatives were in really bad shape. Thanks to The Academy Film Archive, we now have new 1080p high definition digital masters of each film. They did new 2K scans of the original negatives and spent hours removing dust and water spots. I then supervised an all-new color correction. These films have never looked this good! I’m thrilled to be making them available to my fans at NYCC.”

BILL PLYMPTON IN HD is the first home-video release from the newly established Rackoff/Hancock Animated Productions. Formed in 2014 by award-winning producers Adam Rackoff and James Hancock, the duo will also be releasing Bill Plympton’s next Dog short early next year. Both Hancock and Rackoff served as executive producers along with actor Matthew Modine on Bill Plympton’s last animated feature film, Cheatin’, now available on Netflix. For those unable to attend NYCC, Plympton is making a small quantity available to purchase online. Follow @plymptoons on Twitter for more information.