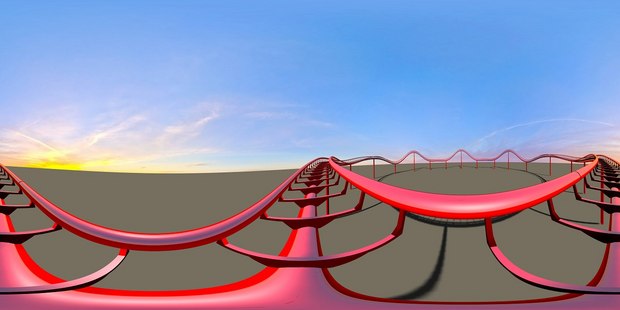 PlayblastVR previs renderings save time & money because hardware based panoramic renderings make better use of the artist's time. Using PlayblastVR also frees up your render nodes from having to use a slower software based production renderer to output your animation test renderings into a panoramic format.

PlayblastVR for Maya version 2.0 is now available for $249 USD and includes a cross-platform license. Existing version 1.0 customers can upgrade a single user license for $99 USD. Discounts are available for multi user licenses.

There is a new digitally signed Mac OS X installer for PlayblastVR for Maya, and an ImageMagick installer has also been provided. This makes it easier than ever to get PlayblastVR up and running on a Mac.

There is a new "Individual Cube Map Faces" panoramic format in PlayblastVR that allows rendering out a group of unstitched 6 cubic camera views to disk directly. This is useful when rendering out to a high resolution 4K panoramic sequence and only one camera view of an otherwise perfect 360 degree rendered sequence needs to be updated.

After the six unstitched cubemap image sequences have been saved to disk by PlayblastVR, the artist has the choice of doing the final step of the cubic to LatLong panoramic conversion using an external tool like After Effects and Mettle's SkyBox Studio, Fusion Studio and the Domemaster Fusion Macros, or Nuke's spherical transform node.

PlayblastVR is now able to render imagery straight to the Facebook 360 style of Cube Map 3×2 image projection. This type of imagery will be gaining popularity over the next year and right now the Facebook 3×2 format cubic panorama can be viewed in a panoramic 360° media viewer like Whirligig or Domemaster3D's Dome Viewer tool.

The angular fisheye based panoramic rendering modes have been improved to increase performance and rendering quality.

There is a new <PanoProjection> file name prefix render token that allows you to write the current panoramic image projection type into the PlayblastVR rendered image sequence file names or the encoded movie file names. This can also be used to create folders automatically to separate each of the different types of panoramic format renderings you create to keep things tidy on your hard disk.

When rendering LatLong format panoramic output there is a new set of "LatLong Horizontal FOV" and "LatLong Vertical FOV" controls available in the PlayblastVR Render Settings. This is useful for rendering LatLong imagery with a cropped field of view.

There is a new Lighting Mode control in the Render Settings window that makes it easier to change the specific type of illumination that is used in PlayblastVR renderings. There is a choice of using the "Use All Lights", "Use Selected Lights", "Use Flat Lighting", "Use No Lights", or "Use Default Lighting" options.

There is a new Use Background material attribute preset included called "pvr_shadowCatcher" that is useful with Viewport 2.0 rendering in Maya 2016+. This attribute preset helps with VFX scene integration style previs work by allowing you to catch the shadows that fall on surfaces. There's also a new tip called Shadow Compositing With the Use Background Material in the documentation that explains how this works.

PlayblastVR network installation is now supported via the PLAYBLASTVR_INSTALL_PATH environment variable that is described in the installation section of the documentation.

Whirligig HTC VIVE HMD/Steam VR support has been added to the PlayblastVR code, along with improved support for the Amateras Dome Player tool.

The perspective panoramic format option has been improved in PlayblastVR so the renderable camera's film back settings are copied automatically.

The new "Use Hardware Texturing" option makes it easy to render your previs scenes with or without texture maps.

Also, there is a new "roller coaster track" example Maya project included in this release as well.