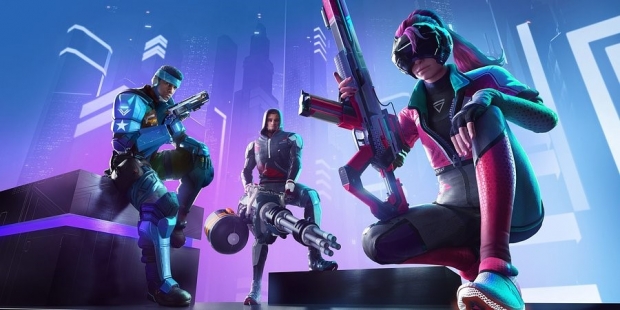 Award-winning creative studio Platige Image has just completed a beautifully designed, highly stylized animated trailer for the Season 2 launch of Ubisoft’s fast-paced urban shooter, Hyper Scape. The two-minute cinematic episode presents events taking place just after the Blackout that shut down the full Hyper Scape – people were hurt and some of the Crown Rush champions are looking for answers…

The new episode presents a progression of the game's plot; it develops the storylines of several characters just after the Blackout struck them and their relatives, with special focus on the path of Nahari and Amandine as they’re looking for answers about what happened to Amandine’s brother, Simon. The trailer presents some new elements available in the game with the launch of Season 2: a new district in the map, a new weapon, a new Hack, and even some of the new champion outfits that will appear in the second season.

According to Platige Image art director Mateusz Mizak, “Our goal was to develop a style which would combine smooth 3D animation, stylized models, spaces, and special effects with what is offered by the game itself. We focused on creating something unique and at the same time consistent with the client's product.”

“We wanted to create a highly stylized project for a long time, and in cooperation with Ubisoft, we managed to make it happen,” added Bartek Kik, animation director at the studio. “We strive to make each subsequent episode more and more refined, and our style even more unique.”

The four-month project, created for Ubisoft Montréal, involved production of more than 100 assets in total (not including characters). Platige used a considerable amount of motion capture on the project, which was then highly stylized and animated.

One of the biggest challenges on the production was staying consistent with the overall design aesthetic within the relatively short production timeframe. “Everything can be drawn, however, recreating it in animation sometimes can give you sleepless nights,” noted CG supervisor Bartek Kmita. “Since we wanted a unique styling, we could not afford standard solutions. We succeeded thanks to the great work of the creative and well-coordinated team.”

Animation producer Hanna Drewek added, “It was 4 months of strenuous and intense activities for the entire team. I am grateful to each and every one of you for your help and commitment to this project. The final trailer shows that it was worth it.”

The trailer, published with the games Season 2 launch last month, is the second animation Platige has created for the Hyper Scape universe. The studio previously created cinematics for other Ubisoft properties including Tom Clancy's The Division 2, Rainbow Six Quarantine, and Watch Dogs.