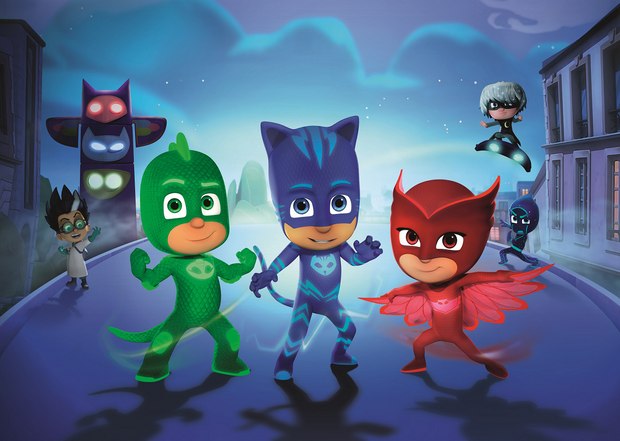 LONDON -- Entertainment One shared strong broadcast ratings for its new preschool super hero series PJ Masks which premiered this month in the U.S. on Disney Channel and Disney Junior.

The first episode of eOne’s new CGI preschool series aired on Disney Channel and Disney Junior in the U.S. on September 18, 2015. The show attracted 1.6 million unique viewers across its Disney Channel and Disney Junior premieres and won an average audience share of 29% among 2-5 year olds. The premiere episode took a top five slot for pre-schooler programming during its first week of transmission.

Produced by eOne and Frog Box, in collaboration with the award-winning French animation studio TeamTO, and with Disney Junior and France 5, PJ Masks is based on French author Romuald Racioppo’s popular picture book series ‘Les Pyjamasques’. By day, 6 year olds Connor, Amaya and Greg go to school like everyone else. But when our heroes get their pajamas on, and activate their animal amulets, they magically transform into their dynamic super hero alter egos and become the PJ Masks. Catboy - super fast and agile, Gekko - super strong and can scale walls, and Owlette - with the ability to fly and see great distances. Together they embark on action packed adventures, solving mysteries and learning valuable lessons along the way.

“We’re absolutely delighted that PJ Masks is proving to be a hit with its core audience of 2-7 year olds in the U.S.,” says Olivier Dumont, Managing Director of eOne Family. “The strength of these initial ratings demonstrates that the super hero characters in PJ Masks have struck a chord with pre-schoolers. The show’s ability to combine excitement and adventure with themes like friendship and teamwork is also appealing to parents. Disney Channel has been a fantastic launch platform for the series and we look forward to introducing PJ Masks to more and more youngsters.”