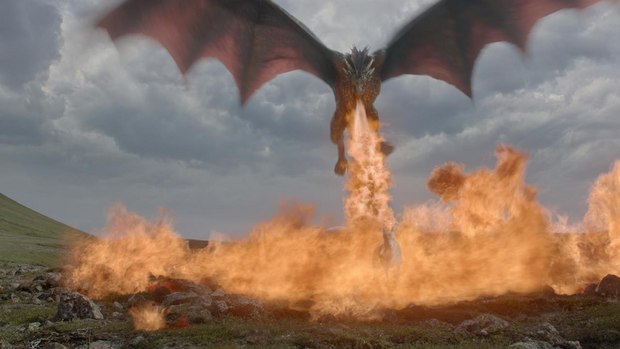 Transporting George R.R. Martin’s fertile imagination from the page to the screen is no easy task -- especially when that means creating three fully-grown CG fire-breathers. Thankfully one of the shows dragon wranglers, Pixomondo, has been on the show since season 2, and with cineSync on its side there’s no challenge it can’t tackle.

Murder, intrigue, Machiavellian scheming of the highest order -- we’ve seen a great deal happen in the Seven Kingdoms and beyond over the past five years. And yet for all the unfurling of dramatic tension and heart-stopping plot twists, one of the most impressive elements of the show remains its CG centerpiece -- the majestic dragons that emerged with Daenerys from that smoldering pyre.

Responsibility for the creation of these reptilian fire-breathers has been with VFX studio Pixomondo since season two. During the second season Pixomondo was the only vendor on the show, working on matte paintings, set extensions, dire wolf integrations and more across all ten episodes.

As the show has grown beyond a one-vendor set-up, and those magnificent dragons have increased in both size and complexity, Pixomondo has become primarily responsible for the CG dragons, and as you would imagine, that’s no mean feat.

“The dragons started out as kitten-sized babies, then they grew to children, then teenagers -- they’ve just become bigger and bigger,” says Sven Martin, Visual Effects Supervisor at Pixomondo. “With that increase in size -- and they really are big this year -- there’s much more screen space to cover, and that demands a much greater degree of complexity.”

Rhaegal, Viserion, and the hulking, black-scaled Drogon are indeed huge in season five, casting dominating shadows across the lands of Meereen and Old Valyria as they thump their wings against the sky. They also get up close and personal with Daenerys, demanding computational horsepower on a level not yet seen in the show.

“We’ve got a lot of close-ups of the dragons, especially when they’re coming into contact with Daenerys, meaning the facial performance has had to become much more evolved,” Martin says of the creatures, noting that Pixomondo has had to make extensive refinements to its facial rig.

“And of course, having these digital creatures so close to the camera meant a total rebuild of the textures,” Martin continues. “For this season, all of the individual scales were modelled individually and then attached to the surface itself, meaning the animators could move the skin without them deforming. Overall these kind of enhancements have been huge -- in season four we had about 74 textures for the whole dragon. In season five we’re at about 740.” Across the Narrow Sea

The only feasible way to create three beasts of such complexity and size was to make sure everyone was working in sync -- a proposition that can be quite difficult to achieve on a project as global as Game of Thrones.

With the Pixomondo team in Germany and the show’s production visual effects team either in LA or preparing for shoots in Northern Ireland, Spain or Croatia, the latest in technology is required to keep everyone working as a single unit.

“When working on the same project from different parts of the world like this, it’s important to be connected, and have everyone on the same page -- or frame,” says Pixomondo visual effects producer Viktorija Ogureckaja. “With cineSync, the sessions have helped to make things so much more efficient. Even though there are hundreds of kilometers separating us from the Visual Effects Supervisor, Joe Bauer, and the Visual Effects Producer, Steve Kullback, and we’re living in different time zones, being able to talk about the same material right in front of us -- it makes it feel like they’re just a room away. The real-world measurements just don’t matter anymore.”

This global synchronization allows the visual effects team to work across oceans and continents on every stage of the dragon creation process -- even from the very earliest pre-production brainstorms: “From the initial dragon design by Dan Katcher to scenes blocking, animation and final compositing, cineSync is used to collaborate on all of the production stages of the dragons,” says Martin. “From the concept phase we were doing a lot of cineSyncs together with the client. We share images a lot, even in the process of finding the right reference images in the animal world. We might like a certain texture on the back of a crocodile, for instance, so will want to mark out those specific areas.”

For Martin, the visual nature and interactivity of the software is essential at this stage. Wordy, lengthy descriptions simply won’t do the trick -- especially not on the strict deadlines of an episodic television show.

“Not only is writing insufficient to demonstrate abstract ideas, but descriptions in the form of an email would take a lot of time to explain your ideas in an understandable way -- and there’s the potential of losing time due to the time zone difference, especially if questions arise,” he explains. “This is where cineSync and features like annotations become very handy -- a certain dragon pose might not be working, and you can immediately react on it and say ‘change the tail to this side’, and so on. It really is like sitting together at one table and drawing with pen on paper.”

Once the concept of the adult dragons had been decided on, next came the sculpting, modelling and texturing of the model proper. Even at this technical stage, cineSync plays an important role in selling the dragon models to the viewer.

“We often prepare close-up turntable renders of the different elements that make up the dragons, which we can then use in a cineSync session for discussions,” says Martin. “For example, we might want to judge the subsurface scattering of certain skin parts of the inner mouth. To see that you have to work with moving images, so the turntables come in really helpful -- you can shuttle back and forth to see how the light is reacting through the textures and appearing on the final dragon.

“With cineSync we can watch and comment on these turntable QuickTimes at the same time in two different continents, meaning everyone knows exactly what everyone else is talking about.” cineSync is a truly versatile tool. Although its primary use is found in group review sessions, Martin has also found it a quick-and-easy solution for jotting down ideas. “Sometimes I just use cineSync on my own,” he says. “For instance, I might want to quickly sketch out some ideas on an image in digital form. I often find it much easier to drag the images into cineSync and sketch my ideas there, rather than loading everything into a graphics program -- it’s much easier, and any annotations I make are easily exported and shared.”

Furthermore, on a shoot with as much media scrutiny surrounding it as Game of Thrones, security is a big concern. After all, no one wants that next big character death spoiled before the episode airs. Thankfully, cineSync is built to keep out any eyes that shouldn’t be on the shot: “Unless you have the session key, there is no way you can connect and review the material with cineSync,” says Ogureckaja. “We can always see who is part of the session.” Peace of mind is integral on a project of this scope. Not only are the on-set shoot and post-production process incredibly demanding, but the expectations surrounding Game of Thrones are higher than for virtually anything else currently showing. It is the television show of the last few years, and if it falls short of the mark, it will be noticed.

Thankfully, Pixomondo’s dragons in season five are more startlingly impressive than ever before -- whether that’s when they’re swooping over the Smoking Sea; meeting Daenerys face-to-face atop The Great Pyramid; or emerging from the shadows in the red light of their own deadly breath in the dungeons of Meereen: they’re a sight to behold. And it’s largely thanks to cineSync for keeping the showrunners in sync.

“Working without cineSync would be really tough -- probably impossible -- so we use it heavily,” says Ogureckaja. “We need to make sure that we have our collaborative ideas and solutions synced and that we’re in some sort of communication harmony. It’s one of the key solutions to working on a tight TV schedule like the one we have on Game of Thrones.”

Meeting deadlines and staying on schedule is certainly a huge bonus, but the real benefit of cineSync to an artistically minded studio like Pixomondo is one geared more towards the creative mind-set: “We’re in visual effects, so we speak images,” concludes Ogureckaja. “Whatever is written down in text could be misunderstood in so many ways and lead in the wrong direction. But even if it’s just an annotation; a scribble -- an image never lies.”