Pixeldust Teams with NASA for ‘The Year of the Pluto’

Pixeldust Studios animates remarkable journey by NASA’S New Horizons spacecraft into furthest edge of our solar system as presented in the new documentary film, ‘The Year of Pluto.’

Bethesda, MD -- Multi-award winning digital animation and broadcast design house Pixeldust Studios created and produced many of the state-of-the-art animations featured within a remarkable new NASA documentary film entitled The Year of Pluto, which was written, produced and directed by Geoff Haines-Stiles, who was also a producer/director on Carl Sagan’s classic 1980 TV series COSMOS.

The new project, filmed behind-the-scenes at Johns Hopkins Applied Physics Lab in Laurel, MD and elsewhere over more than 11 years, is a one-hour documentary which turns hard science into personal stories, and gives viewers insights into the history and long journey of NASA’s New Horizons spacecraft, and why it matters.

For The Year of Pluto, Pixeldust Studios had to render more than 10,000 frames for the entire Kuiper Belt sequence, which ran nearly six minutes long. The company deployed its robust render farm for this monumental task which was comprised of 70-80 render nodes running Intel i-7 processors with 12-16 GB of RAM. Maya’s Mental Ray was used for rendering, and the overall render time was about anywhere from five to six days, spread out in different increments. Final frames were composited in Adobe After Effects CC 2014. 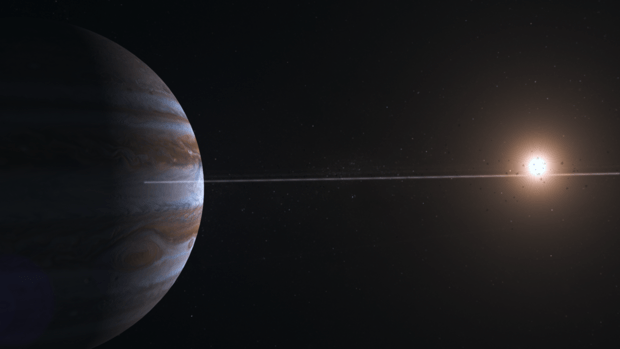 The new documentary details the mission of the unprecedented New Horizons spacecraft, which launched from Earth on January 19, 2006. New Horizons is presently hurtling toward the still more distant “ice worlds” situated at the furthest edge of our solar system. New Horizons made its first reconnaissance of the dwarf planet Pluto on July 14, 2015, returning stunning close-up images of Pluto and its largest moon, Charon, and becoming NASA’s biggest social media success to date.

Beyond July 2015, New Horizons will continue its journey by venturing deeper into the distant, mysterious Kuiper Belt -- a relic of our solar system’s formation. Interviews with leading scientists are featured throughout The Year of Pluto, as they share their thoughts about how the New Horizons mission will answer many long-pondered questions.

The Year of Pluto has already generated over 320,000 views on NASA TV’s YouTube channel, and more than 64,000 views on APL's site. One viewer on NASA’s YouTube Channel commented, “One of the best NASA films ever,” while another wrote, “That was awesome. Even jerked a tear -- humanity’s amazing feats. There’s still hope for our race.”

“Pixeldust brought creativity, intelligence, and a deep commitment to accurate science to this project,” said Geoff Haines-Stiles, the writer, producer and director of The Year of Pluto. “They took the best still images from telescopes, plus space artists’ speculations and expert input from our advisors, and transformed that data into a dramatic television trip through the Kuiper Belt. As always, their team was a pleasure to work with -- responsive, quick, and ever-willing to go the extra mile to make things look great and reflect as much as we know about this mysterious realm of ice worlds.”

“This was really an amazing project for us -- after all, how often do you get the chance to visualize the outer edges of the solar system, Pluto, and beyond!” added Pixeldust founder and executive creative director Ricardo Andrade. “Pixeldust also had to recreate our solar system and sculpt Pluto and its moons using realistic planetary textures. Extra attention was given to overall relative scale of planets and their moons with respect to the larger Kuiper Belt.”

“Our assignment here was to digitally recreate the Kuiper Belt and the Oort Cloud based on Tony Dunn’s Gravity Simulator point cloud data from the Harvard-Smithsonian Minor Planet Center and vector images,” said Pixeldust CG supervisor Samar Shool. “The biggest challenge was to create both of these elements in a volumetric form for which we deployed the use of nParticle systems inside our native software Autodesk Maya 2015. With use of nparticles, we were able to achieve large volumes of point clouds and render them efficiently, using Maya’s own Mental Ray renderer. “In addition we had to recreate seven Kuiper Belt Objects based on certain locations on July 14 2015, from data provided again by Tony Dunn,” Shool continued. “These relatively large KBOs had to be digitally sculpted, textured and rendered realistically based on other planetary references, including color data from the Hubble Space Telescope. We used Zbrush 4-R6 to sculpt these objects and we rendered them in Maya/Mental Ray. We paid special attention to realistic ‘space’ lighting and had to make sure our camera always faced the lit side of the planets. The next overall challenge was to show the presence of these objects along with their motion orbits, all together housed inside the Kuiper Belt. Using carefully planned camera moves and the use of Zdepth, we were able to create interesting fly-throughs between the KBOs and their orbits.”

New Horizons is NASA’s first mission to the Pluto system and the Kuiper Belt, a vast zone of icy bodies and mysterious small objects orbiting beyond Neptune. This region also is known as the “Third Zone” of our solar system, beyond the inner rocky planets and outer gas giants. During the half-hour when New Horizons was closest to Pluto (about 7,750 miles) at 11:49 UTC/07:49 Eastern Time, on July 14, 2015, the spacecraft looked for ultraviolet emissions from Pluto’s atmosphere and made the best global maps ever of Pluto and its moon, Charon.