Prolific production designer and Oscar-winning director of animated short, ‘For the Birds,’ to be honored at upcoming October 21-25 conference. 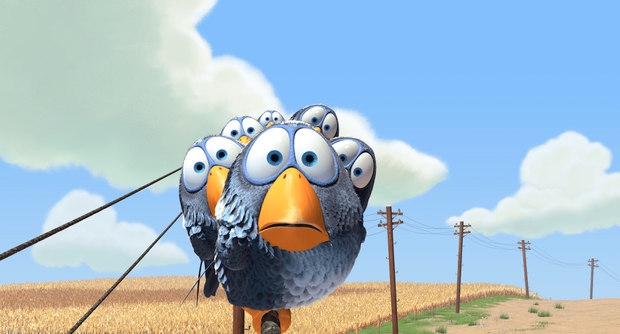 The VIEW Conference has just announced that veteran Pixar production designer Ralph Eggleston, who won an Oscar for his 2001 animated short, For the Birds, will be honored with the VIEW 2019 Visionary Award at the upcoming October 21-25 event.

Since joining Pixar in 1993, Eggleston has worked on many of the studio’s biggest films, starting with 1995’s Toy Story, the world’s first fully CG animated feature.  A prolific production designer and art director, Eggleston has won three Annie Awards (Inside Out, Finding Nemo, and Toy Story), and been nominated for three Art Directors Guild awards (Incredibles 2, Wall-E, and The Incredibles), in addition his Oscar. In 2018, he was honored by ASIFA-Hollywood with their Winsor McCay Award for career achievement in animation.

“We are giving the Visionary Award to Ralph Eggleston this year for his many years of bringing unparalleled beauty to this world,” Conference Director Dr. Maria Elena Gutierrez says.

“I am Honored beyond belief to be receiving the 2019 Visionary Award at the View Conference in Turin, Italy,” Eggleston shares with AWN. “To be considered for an accolade like this means more to me knowing it’s coming from peers whom I learn from, work with, and share knowledge with.  Dr. Maria Elena and the folks at the View Conference have been gracious, once again, in organizing one of the finest gatherings of artists, filmmakers, and musicians in the world, and I’m glad to be a part of it.  To also be bestowed with an honor such as this is icing on the cake!”

In a 2015 AWN interview about Eggleston’s work on Pixar’s Oscar-winning animated feature, Inside Out, this author wrote:

“There are very few people in animation I enjoy talking to more than Ralph Eggleston. Not just because he’s a tremendous artist. Not just because he tells great “wink-wink” stories about how the industry ‘really’ works. And not just because he displays abundant patience explaining even the simplest of production concepts to me. It’s because he exudes an intoxicating and infectious enthusiasm for all things animation. That enthusiasm hits you with such force, with such energy, you’re almost taken aback, surprised as it completely envelops you. As he speaks, you suddenly realize you’re smiling. At everything.

Talking to Ralph reminds you why animators are so inherently insane, fearless and lovable. And even though he speaks so intimately and assuredly about the concepts and language of production – color, lighting, tone, visual development – he does so without pretense or conceit, because if you know Ralph, you know his ultimate goal, the singular focus of his relentless work ethic, is to put a smile on each and every Pixar film audience member’s face. That’s his measure of success.”