‘Finding Dory’ character Hank the ‘Septopus’ has been Pixar’s best-kept secret for more than 25 years. 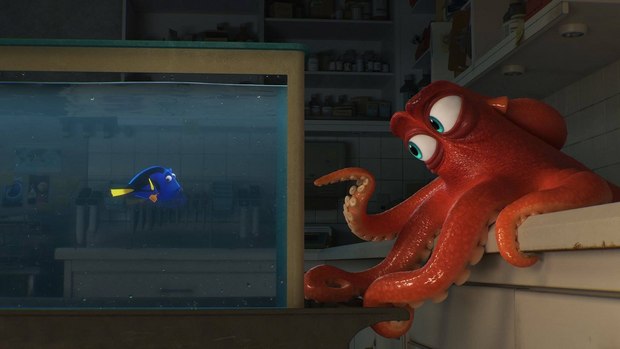 BURBANK, CA -- Disney•Pixar announced that Finding Dory, featuring the voice of Ed O’Neill as Hank, opens in theaters nationwide on June 17, 2016. Hank, the film’s cantankerous octopus with camouflaging capabilities, has appeared in every one of their feature films since 1995’s Toy Story.

“Every Pixar fan knows that we love Easter Eggs,” said director Andrew Stanton, who also directed the 2003 Oscar-winning film Finding Nemo. “And until now, Hank has been our most closely guarded secret. There are even people internally at Pixar who don’t know about this.”

Pixar is known for the hidden gems that appear in its feature films, including the Luxo Ball, the Pizza Planet Truck and A113, which is a nod to the animation classroom at CalArts that was attended by several filmmakers. But the octopus, who’s actually a “septopus,” as he’s missing a tentacle, has remained a secret for two decades.

“Hank started off as a bit of an inside joke between those of us who were here at Pixar in the very beginning,” added Stanton. “But since then, finding a place for him in our films has become part of our culture, and I’m glad we finally get to introduce him properly to fans.”

The studio released a short video featuring Stanton and O’Neill, showcasing several of Hank’s cameos throughout the years and even providing a new glimpse of the character in action in Finding Dory.