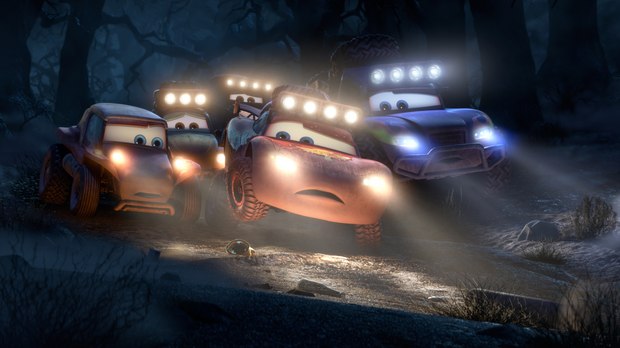 Race into summer with the Disney Movies Anywhere premiere of Radiator Springs 500 1/2. The all-new Disney•Pixar short is available for free, and is an exciting first installment in the "Tales from Radiator Springs" series.

Like all the other Pixar shorts based on feature movies -- Toy Story Toons Hawaiian Vacation, Small Fry, and Partysaurus Rex, for example -- all of the original voice cast is back. Here’s the synopsis:

Featuring Owen Wilson as Lightning McQueen and directed by Rob Gibbs (Mater's Tall Tales), Radiator Springs 500 1/2 tells the story of a “leisurely drive” planned in honor of Radiator Springs’ town founder, Stanley, which turns precarious as Baja pros descend on the town and challenge Lightning McQueen to an off-road race. Meanwhile, the townsfolk, led by a Stanley-costumed Mater, enjoy the planned “leisurely drive” to retrace Stanley’s original frontier route. Thinking they’re on the same course, a wrong turn sends McQueen and the Baja pros on a treacherously wild bid for survival. The misunderstanding leaves the racing professionals in awe of the “legend” of Stanley: the Original Off-Road Racer.

Watch a preview of the short, below: