Pixar Fixes Tech from the ‘Inside Out’

Virtual Production and Lighting were just two of the technological hurdles Pixar Animation Studios faced making ‘Inside Out.’ 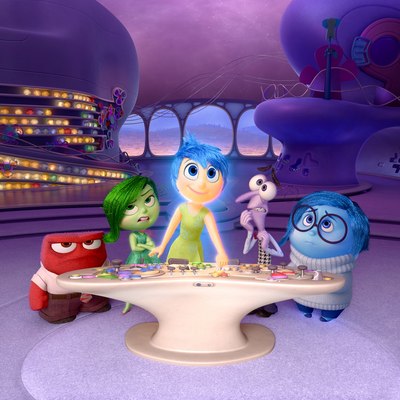 Tech Crunch has an Inside Out look at how Pixar cleared the technological hurdles necessary to create this summer’s highly anticipated 3D animated release.

Directed by Pete Docter of Up fame, Inside Out is the story of a young girl named Riley who is uprooted from her Midwest life when her father starts a new job in San Francisco. Like all of us, Riley is guided by her emotions: Joy (Amy Poehler), Fear (Bill Hader), Anger (Lewis Black), Disgust (Mindy Kaling) and Sadness (Phyllis Smith). The emotions live in Headquarters, the control center inside Riley’s mind, where they help advise her as they struggle to adjust to a new city and school.

Here are a couple of the highlights:

“We’re just like a live action camera crew,” director of photography Patrick Lin said. “Our big tool, our main tool is a camera — only, our camera is virtual. But although it’s virtual, it’s mathematically true. It has lenses, focal length, focus, F-stop, distortion, depth of view and everything. We mimic real camera movement as if it’s on track, dolly, crane, steadicam or handheld.”

Character lighting lead Angelique Reisch says that Joy’s glowing nature was one of the tougher technical challenges to overcome. “We needed really believable light cast from her, so when she was animated, we wanted to feel that light moving around on the set,” she said. “Additionally, we wanted it to be pretty detailed. If she picked up, for example, a frog, we want to see the light between her fingers. We don’t want to just put a spotlight on there and make the whole thing bright.” Disney will release Inside Out in 3D in theaters everywhere starting June 19, 2015. Head over to Tech Crunch to read the full story.