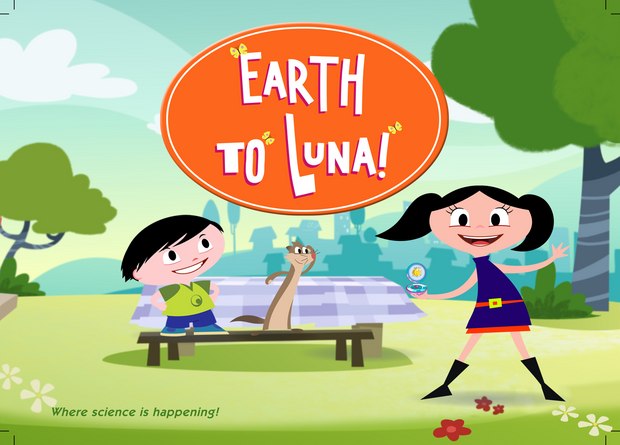 PinGuim, Brazil’s leading animation company, has appointed Union Media as the international distributor for its new series Earth to Luna!, which has just been sold to Sprout for the U.S.

The 52x12’ preschool series features the adventures of a little girl who’s completely, undeniably and passionately into just one thing: science! As well as Sprout, it has already been sold to TV Brasil, Discovery Kids Lat Am and the U.S. Spanish-speaking family channel Familia. Animated in TV PinGuim’s distinctive animation style, the series takes children, aged 3 to 6, on a journey of discovery that stimulates their curiosity in the wonders of the natural world.

Earth To Luna! Follows the adventures of Luna, a six-year-old girl, her little brother Jupiter and pet ferret Clyde. For Luna the earth is a giant laboratory and she dives into every new experience with boundless energy and enthusiasm! What most of us might ignore, Luna notices and cannot rest until she answers the question: “Why is this happening?”.  There is there is nothing Luna won’t do or imagine to find the answers to her scientific questions!.

Union Media has been appointed as the international distributor worldwide outside the Americas, while for the Americas the distribution will be done directly by TV PinGuim.

Union Media is a new international distribution business founded in 2012 by Adam Selly, following many years in the industry in senior positions at HIT Entertainment, Entertainment Rights and LazyTown Entertainment. It represents a growing slate of new animation series for broadcast and licensing rights worldwide.

TV PinGuim, Brazil’s leading animation company, was founded in 1989 by Celia Catunda and Kiko Mistrorigo to create entertaining, educational, distinctive and bold programming for children of all ages. TV PinGuim’s animation portfolio covers a diverse range of subjects from science to sci-fi and from art to the environment.  TV PinGuim’s biggest hit to date is the high-rating series Fishtronaut.

“Earth to Luna! is a wonderful new series to inspire young children about science and discovery,” said Adam Selly. “I am delighted to have a chance to bring it to a wider audience around the world.”

"We're looking forward to Luna reaching children around the world, sparking both their curiosity and imaginations with her fun, whimsical songs and passion for science,” said Celia Catunda, Creative Director and Co-Founder of TV PinGuim,