Not To Scale Amsterdam and BSUR directors Pierre & Bertrand rebrand the original Peperami into a more modern, adventurous and tastier character. 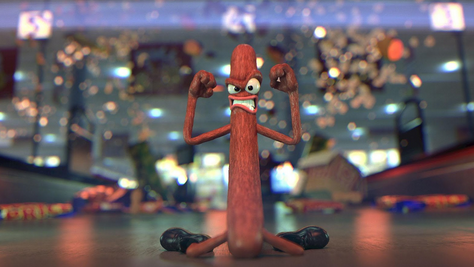 The first in a series of TVCs, Pierre and Bertrand of Not To Scale Amsterdam, alongside creative team, BSUR developed a disruptive meaty snack spot, rebranding the original Peperami and into a more modern, adventurous and tastier character. Peperami smashes its way through supermarket groceries with the help of his animal friends.

“Thanks to 3D techniques we were able to emphasize existing details and turn it into even more of an animal, exaggerating all the facial expressions, mouth, eyes, teeth and eyelids. We think we found the right balance between realistic meat and something which would fit our design,” says Pierre + Bertrand.

The additional characters will be seen in future TVCs, print campaigns and product packaging together, launched under brand name, BIFI in Germany and in the launch of Pork Juice, the next big thing in your juice bar. 100% Peperami, 100% juice, 100% spoof.

Source: Not to Scale Amsterdam