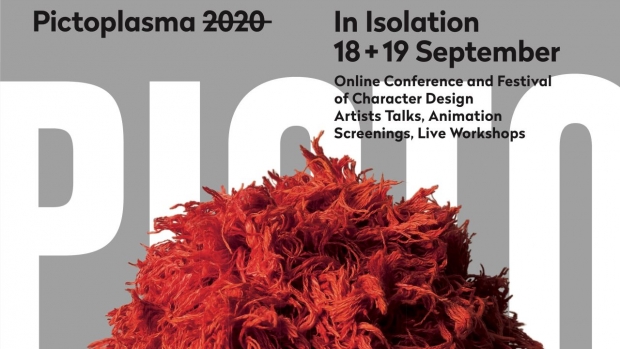 Pictoplasma has been welcoming speakers to its annual conference in Berlin since 2004; there they shared idea processes, methodologies, and expertise in character design. The event, originally scheduled for May, has been forced to be reimagined, using the current circumstances as an opportunity and a starting point to begin something new. This year, from September 18-19, the first ever digital 'Pictoplasma in Isolation' is set to take place as a free 2-day livestream broadcast. The event features more than 40 artist talks by and conversations with illustrators, animation filmmakers, visual artists, and designers, as well as performance artists, activists, and academics.

This year’s edition of the festival puts a thematic emphasis on the mask and expands on Pictoplasma’s ongoing research into how characters relate to, invade, take over and warp the human body, reexamining one of our most ancient cultural artifacts in a new light. Special sections feature lectures, presentations and conversations with artists and designers, activists, scholars, and performance artists who work with visual techniques of facial disguise.

Among the artists are:

Activists from Chile will talk about the long tradition of the capuchas in their country and how a feminist movement took it to a new meaning. Two digital artists will reflect on how face filters function as a way to change our identities online: David OReilly, renowned for his animation films and games, whose filters have been downloaded more than a billion times, and Ines alpha, who pushes the boundaries of beauty and virtual make up. Rapper Zebra Katz, vocal band iKi, the noise guerrilla BNNT and the electronic duo Dengue Dengue Dengue, will each perform and reflect on why wearing a mask is part of their artistic practice.

This year's animation section has received over 900 submissions from around the world; 77 selections will be streamed in four carefully curated programs. The official selection includes award-winning Anna Mantzaris' latest stop-motion film; a surprising sci-fi trip fast-forwarding through humanity's development by Kirsten Lepore; a visual explosion of color and rhythm by experimental film-maker Caleb Wood; the feverish psychedelia of French animation collective Meat Department; and the latest digital nightmares by US American 3D enfant terrible Cole Kush.

A second channel features workshops that allow viewers to join international artists and get hands on with different media. Jon Burgerman and Nathan Jurevicius both host playful sessions that focus on instant and spontaneous creativity. Julian Glander showcases how fast he can build complex illustrations using the simplest shapes in Blender.

A panel discussion explores the current stage of illustration in light of its digital transformation and whether today's visual culture is governed by a new regime of ‘Corporate Memphis.’ A second panel focuses on animation film: In the height of lockdown, many previously shelved animation projects have been green lighted by producers as live action was no longer possible to shoot, and animation seemed pandemic proof.

Participation in the two-day Pictoplasma in Isolation broadcast is free. Prior online registration is available on the event website.