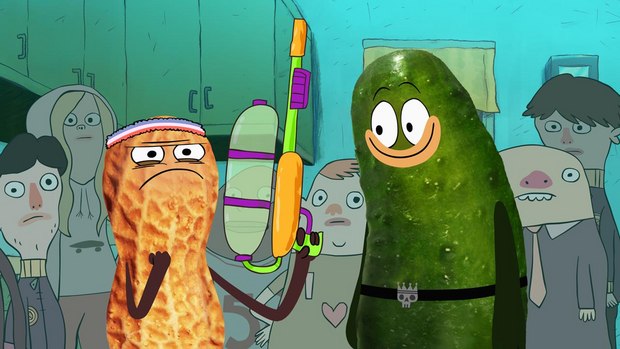 Created by Noah Z. Jones (Fish Hooks) and developed by Joel Trussell (Yo Gabba Gabba!), Pickle and Peanut finds small-town teens Pickle and Peanut embarking upon their last year of high school, determined to cram in as much fun as possible before taking on the inevitable adulthood responsibilities. The two underdogs dream up plans to be anything but ordinary in their slightly bizarre fictional suburb of Reno, Nevada. The series employs an inventive mix of 2-D animation and live-action clips that highlight the unpredictable humor and quirky nature of the series. WATCH Disney XD launches a new game as part of its summer game-a-week event. Players help Pickle and Peanut zip through Mjart Mart in a shopping cart while shooting Spoonicorn cereal and avoiding crashing into customers.

“Greg” – Pickle lends his new pimple friend, Greg, to frenemy Lazer in hopes of landing an invitation to his cool party. When they realize Lazer has no intention of returning Greg, Pickle and Peanut must save him.

“Gramma Jail” – When Pickle and Peanut accidentally get the sweet elderly Mam Mams arrested, they have to break her out of “gramma jail” before inmate Psycho Cyclops can get to her.

11-minute previews of each episode will be available to verified users on WATCH Disney XD one week prior to their television debut on Disney XD. Jones and Trussell serve as executive producers, wrote and sing the opening theme song, and provide voices for Champion Horse and Whispers, respectively. Scott Sonneborn (Beavis and Butt-Head) is the story editor. Pickle and Peanut is a production of Disney Television Animation and carries a TV-Y7 parental guideline.

Disney XD is a basic cable channel and multi-platform brand showcasing a compelling mix of live-action and animated programming for kids age 6-11, hyper-targeting boys and transporting them into worlds full of humor, unexpected fun and inspiring action-filled adventures. Disney XD-branded content spans television, online, mobile and VOD platforms. The programming includes series, movies and short-form, as well as sports-themed programming developed with ESPN. In the U.S., Disney XD is seen on a 24-hour, advertiser supported network that reaches over 80 million households via its basic cable and satellite affiliates. In total, there are 31 Disney XD channels available in 25 languages around the world.