TBWA\NEBOKO tapped creative studio Ambassadors to bring human emotion to the family pet in the Dutch supermarket chain’s annual seasonal short; Harry, the hamster, feels displaced by the arrival of a new baby – not truly forgotten, he finds love and meaning. 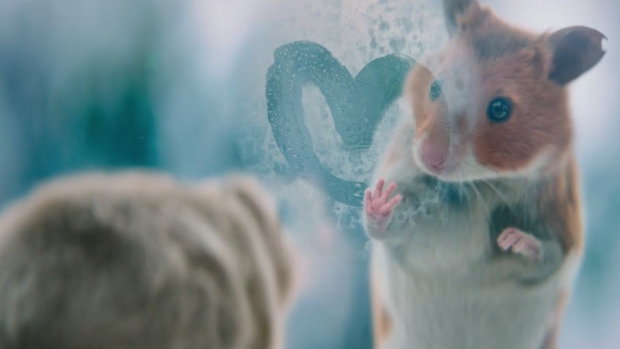 Pets and the holidays, they have special meaning and a place in every family. But sometimes new family members make them feel left out, lonely… even a bit sad. Fast forward to a new holiday commercial from creative agency TBWA\NEBOKO in Amsterdam for Albert Heijn, a large Dutch supermarket chain. The supermarket’s annual holiday campaign features a returning cast of well-known characters.

This year there’s a new baby in the mix, leaving Harry the animated family hamster feeling a bit forlorn. As the family’s focus and attention moves to the newborn baby Robin, Harry feels a bit lonely. In an 80-second mini-film, Harry imagines an exciting adventure where he can celebrate Christmas with his new love. To bring life to Harry and his new romantic partner, Ambassadors was called in to create the adorable little creatures and imbue them with human emotion.

Led by Ambassador animation director Nick Groeneveld, the studio worked closely with the creative studio. The ‘Hamstereen’ campaigns have run since 2010 but this was the first time comical, stylized animated hamsters have played a leading role through photorealistic CG animation.

“That was our major creative technical challenge - you have these hamsters with emotional, human moments like gazing lovingly at each other and even drawing a love-heart on the window,” explained Groeneveld. “How can we as artists find that good middle-ground between human-like acting to carry the story and natural hamster body movement?”

He continues, “We worked closely across our creative production studio to craft their movement in the most believable and - also important - cute way. The Dutch public is the judge here, and we were really happy to see they love our little Christmas hamster love story as much as we do.”

The TV commercial premiered December 6 on all Dutch television channels, online, as well as, in cinemas.