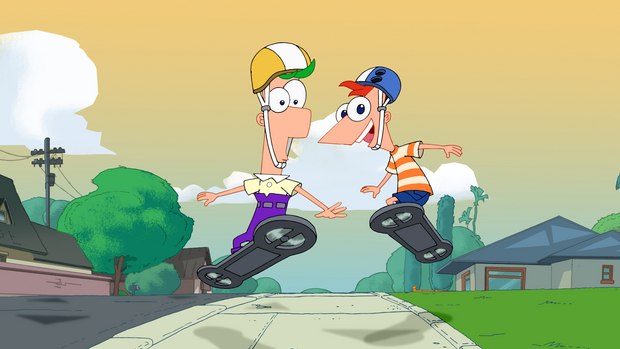 Povenmire and Marsh are the creators and executive producers of Mikey Murphy's Law, scheduled for a 2017 premiere, and joining them are Phineas and Ferb colleagues – producer and director Robert F. Hughes, story editor Scott Peterson and staff writers Joshua Pruett, Dani Vetere and Martin Olson.

The team wrapped production on the Emmy Award-winning and BAFTA-nominated Phineas and Ferb after 126 episodes, five one-hour specials and a record-breaking Disney Channel Original Movie. The series will continue to be presented daily on Disney XD and Disney Channels around the world. In the U.S., it was TV's #1 animated series among Tweens 9-14 and the #1 animated TV series in Primetime among Kids 6-11 from 2008-2013. The movie, Phineas and Ferb: Across the 2nd Dimension (August 2011), remains the #1 animated telecast in cable TV history in Kids 2-11 and ranks among the Top 5 cable TV movies of all time in Total Viewers.

Celebrating its appeal, every Phineas and Ferb story ever told will be presented in a 73-hour marathon beginning Tuesday, June 9 (8:00 p.m., ET/PT) leading to the ultimate story capper, "Last Day of Summer," premiering Friday, June 12 (9:00 p.m., ET/PT) on Disney XD and simulcast on Disney Channel. The series will continue to air daily on Disney XD. A standalone hour-long special "The O.W.C.A. Files," which focuses on the organization's best secret agent, Agent P (also known as Perry the Platypus), and his fellow animal agents, will premiere this fall on Disney XD.

“Dan and Swampy are two of the most respected and proven show creators in the animation series business,” said Marc Buhaj, Senior Vice President, Programming and General Manager, Disney XD. “They are incredibly gifted storytellers who have a track record of creating smart, original and relatable characters that are universally appealing to both kids and families.  It's a coup for Disney XD to continue working with this talented duo on their latest creation, Mikey Murphy's Law. We're looking forward to another great creative partnership.”

Marked by clever multi-level humor, strong male and female role models, strong family ties, the depiction of a step-family and a relatable story of kids growing up and using their imaginations, the music-filled, 2D-animated comedy followed ingenious Phineas Flynn and his resourceful step-brother, Ferb Fletcher, as they happily set out to conquer boredom and make every day of summer vacation count for something.

In the one-hour Phineas and Ferb episode titled "Last Day of Summer," the summer season is coming to a close and it's Candace's last chance to bust her brothers. She is quickly foiled, but is presented with an opportunity to redo the day when she sets off Dr. Doofenshmirtz's Do-Over-Inator, which results in other consequences like rips in the space-time continuum, the shortening of days and the disappearance of her brothers.