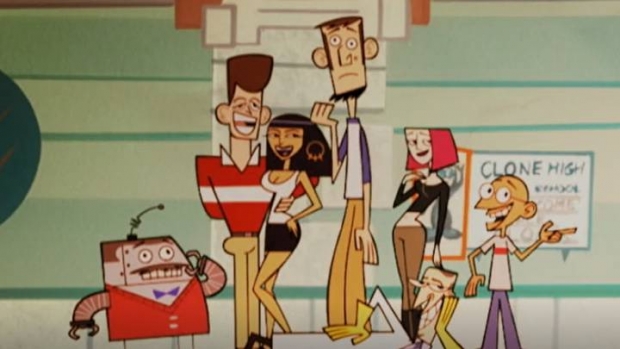 MTV Studios is getting back into the Phil Lord and Chris Miller business! And these days, who isn’t? The ViacomCBS unit just announced that the Oscar-winners are reuniting with their co-creator, Emmy-nominated Bill Lawrence, and Emmy-winner Erica Rivinoja, to develop and produce a reimagined version of their 2002 animated series, Clone High.

The show, which ran in 2002 on Teletoon in Canada before airing on MTV, was originally developed by Lord and Miller in the 1990s while students at Dartmouth. It’s widely regarded as a time capsule of the early 2000s with its loving satire and wry parody of emo culture. Rivinoja, a writer on the original series, will serve as showrunner and co-write the pilot with Lord and Miller.

Like the original show, Clone High will follow prominent historical figures who have been cloned and placed back in high school, including Abraham Lincoln, Cleopatra, Joan of Arc, John F. Kennedy and others; the adult animated series will explore coming of age tension through the eyes of historical figures and U.S. president, as they face the trials and tribulations of normal teenage life.

“We thrilled to reunite with Phil Lord, Chris Miller and Bill Lawrence to re-imagine this cult classic as we rapidly grow our portfolio of beloved and iconic adult animation series,” said Chris McCarthy, President, ViacomCBS Entertainment and Youth Group.

The series generated a bit of controversy during its original run with its depiction of Indian leader Mohandas K. Gandhi. In January 2003, MTV, in a statement, said, "MTV US apologizes if we have offended the people of India and the memory of Mahatma Gandhi." Though the show wasn't airing in India, the MTV Website carried a picture and description of the Gandhi clone, proclaiming his nickname as "DNA Dan" and listing among his activities eating "extreme" food products, rapping and "being the ultimate party animal." This depiction of India's revered leader did not sit well with many people in the country, and over a hundred activists fasted at Gandhi's memorial to show their opposition to the show. The MTV statement went on to say, "MTV US wants to make it clear that Clone High was created and intended for an American audience. We recognize and respect that various cultures may view this programming differently, and we regret any offense taken by the content in the show."

Lord and Miller began their careers writing, directing and executive producing Clone High with Lawrence in 2002.  The pair went on to win an Academy Award for Spiderman: Into the Spider-Verse and have originated feature franchises such as Cloudy with a Chance of Meatballs, 21 Jump Street and The LEGO Movie, all of which have grossed more than $3.3 billion at the global box office. On the television side the pair were behind the comedy series The Last Man on Earth, which was written by and starred Will Forte. The series was nominated for five Primetime Emmy Awards, including a nomination for Lord and Miller for Outstanding Directing for a Comedy Series.

They are currently behind the animated comedy series Bless the Harts, from creator Emily Spivey, which will soon debut its second season on FOX. Last year, the pair signed a massive five-year, 9-figure production deal with Sony Pictures Television to develop animated Marvel series projects, which may include an Into the Spider-Verse project. They also signed a rich first-look production deal with Universal where they will develop features in both comedy and drama that will hopefully serve as future reboot material. They have several projects in various stages of development including the live-action feature tent-pole The Last Human for Sony, Fox’s Artemis based on the novel by Andy Weir, a sci-fi adventure feature based on an original idea by Weir for Universal and an untitled adaptation of Weir’s forthcoming novel Project Hail Mary. The pair’s animated feature, Connected, with Sony Pictures Animation, is tentatively scheduled for release this October.

It was also recently announced that Lord Miller is behind the upcoming Apple series The Afterparty, a murder-mystery comedy set at a high school reunion afterparty. Each of the eight episodes will feature a retelling of the same night told through a different character’s perspective, each with its own unique visual format and film genre to match the teller’s personality.

Not to be outdone, Lawrence went on to create the Emmy-winning Scrubs and Cougar Town.