In space, no one can hear you scream…or giggle; new animated comedy from ‘Solar Opposites’ creator Mike McMahan premieres August 6 on CBS All Access. 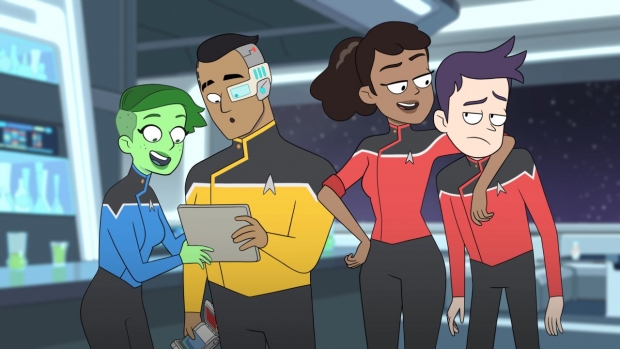 If you’ve ever wondered how the other half lives in the nobly idealistic and highly motivated world of Starfleet, then brush off your tricorder - the one you overpaid for years ago at Comic-Con – and set your phasers to August 6, the premiere of CBS All Access’ new animated comedy, Star Trek: Lower Decks.

Half vigilant inter-galactic peacekeepers, half overzealous space newbies, half holodeck waste removal specialists, the “scrappy” ensigns of the of the U.S.S Cerritos are poised for action-adjacent adventure. In the show’s just dropped official trailer, we discover that in the year 2380, jokes about the Captain’s log are as endless as they are here on Earth in 2020, and that workplace comedies can indeed boldly go where no one has gone before.

The show, developed by Emmy Award winner Mike McMahan (Rick and Morty, Solar Opposites), features the support crew of one of Starfleet’s least important ships, the U.S.S. Cerritos; Ensigns Mariner, Boimler, Rutherford and Tendi have to keep up with their duties and their social lives, often while the ship is being rocked by a multitude of sci-fi anomalies. The crew residing in the “lower decks” of the starship includes “Ensign Beckett Mariner,” voiced by Tawny Newsome, “Ensign Brad Boimler,” voiced by Jack Quaid, “Ensign Tendi,” voiced by Noël Wells and “Ensign Rutherford,” voiced by Eugene Cordero. Starfleet characters that comprise the ship’s bridge crew include “Captain Carol Freeman,” voiced by Dawnn Lewis, “Commander Jack Ransom,” voiced by Jerry O’Connell, “Lieutenant Shaxs,” voiced by Fred Tatasciore and “Doctor T’Ana,” voiced by Gillian Vigman.