Award-winning series from TAT Productions and Master Films is back for 52 more episodes. 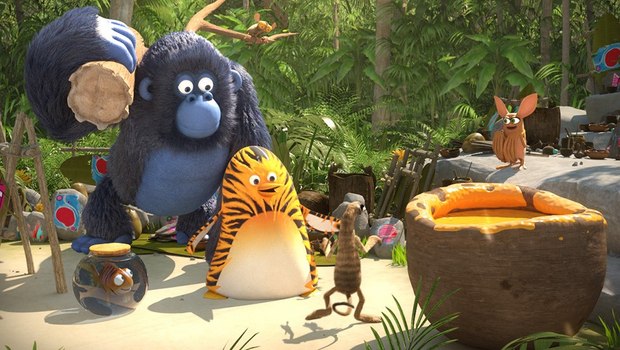 Hong Kong -- Following the success of the first season of The Jungle Bunch to the Rescue!, PGS is announcing the first pre-sale of the second season (52 x 11min) to Germany’s Super RTL. The new season was commissioned by France Télévisions and is currently in production. Produced by TAT Productions and Master Films, the first season has been sold in over 180 territories, including to such broadcast partners as France 3, Rai, TVE, ABC Australia, Super RTL, and many more. PGS holds all distribution and licensing rights to the franchise and also manages the global licensing program.

“The Jungle Bunch is one of those exceptional properties that resonates with broadcasters and kids around the world,” said Guillaume Soutter, president, PGS HK. “It has become an instant classic thanks to the brilliance of TAT Productions and Master Films. They have created such a lovable and engaging bunch of characters. We are delighted that Super RTL has jumped on season 2 for more adventures of The Jungle Bunch.”

Based on the original movie, The Jungle Bunch: Back to the Ice Floe, the series The Jungle Bunch to the Rescue! features a comedic array of animal characters, including Maurice, the penguin who thinks he’s a tiger; Miguel, the punchy gorilla; Fred, the warthog crooner; Junior, the tiger fish; and more.

“When we aired the first episodes of The Jungle Bunch, results were really promising,” said Carsten Göttel, Programming Director at Super RTL. “Ratings in our target group were good and kids also flocked to our website www.toggo.de, where we launched a sub-site featuring The Jungle Bunch with games, fun facts and other content around the series and its characters. Overall, we are happy committing ourselves to picking up and supporting the development of the second season and are really excited to get to see new tales from tiger-penguin Maurice and his funny pals from the The Jungle Bunch.”

The Jungle Bunch is the winner of five international kids programming awards, and was nominated for the prestigious Kids Emmy Award. Most recently, PGS garnered the Prix Export Award by TV France International for the sales strength of the global franchise.