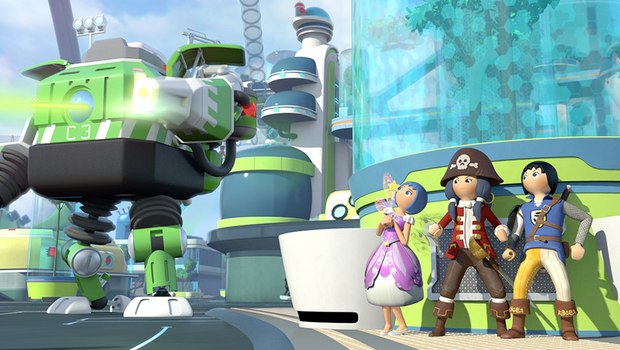 Leading kids programming distributor and brand manager PGS Entertainment has secured a raft of media licensing deals for the animated series inspired by Playmobil -- Super 4.  Produced by Method Animation and morgen studios, and commissioned by France Télévisions, PGS represents the series in all territories and has secured media licensing agreements across Europe and Asia.

Super 4 (52 x 11’) is a comedy/adventure series produced in CGI, native 3D for kids aged 5 to 9. It features four key characters: Alex the Knight, Ruby the Pirate, Agent Gene, and Twinkle the Fairy.  Together, they travel through five extraordinary islands: Technopolis, Kingsland, Enchanted Island, Gunpowder Island and a Lost World. They move through these islands in their multi-transformable vehicle, Chameleon. This series marks the first time the 40-year-old children’s brand has come to television.

“The Playmobil brand is recognized throughout the world so we are pleased to represent a series that kids and parents will immediately identify with,” notes Guillaume Soutter, PGS.  “The initial episodes delivered by Method and morgen are stunning and broadcasters are responding with great enthusiasm.”

These partnerships come in addition to previously announced broadcast deals for Super 4 with Neox Kidz (Atresmedia) in Spain, TV3 in Catalonia, Canal Panda in Portugal, RTBF in Belgium, RTS in Switzerland, RTL téléKids in Netherlands & Luxembourg, MTV3 in Finland, Canal+ in Poland; Noga in Israel; Workpoint in Thailand; Radio-Canada in Canada, CiTV in the United Kingdom and Cartoon Network in Italy and Latin America.