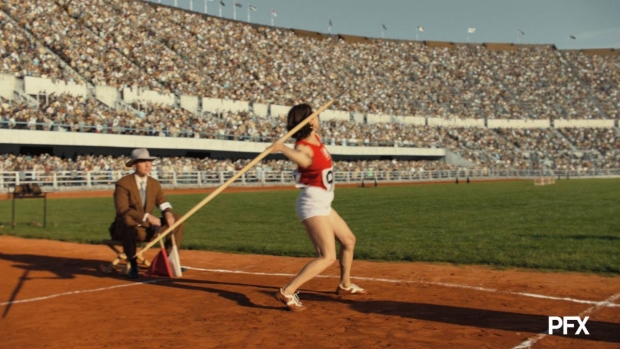 Prague-based studio PFX was tasked with visual post-production on the Czech cinematic production of Zátopek, which premiered last summer. It was the first feature film about the life of iconic Czech runner Emil Zátopek, who made history at the 1952 Olympic Games in Helsinki when he became the first person in the world to win both the 5000m and 10,000m races, and even the marathon to boot!

PFX was responsible for the film’s entire visual post-production, including data management, editing, color grading, and most importantly, the visual effects.

The film, a 134-minute biographical historical drama, includes a crucial visual component: 38 minutes of special effects, half of which take place across sports stadiums all over the globe. According to the studio, the stadiums proved to be one of the greatest challenges of the entire project. The PFX creative team was tasked with achieving an authentic and accurate depiction of legendary races on sporting grounds that either no longer exist or were in a different part of the world.

“We started working with the film’s creators long before the first scene was even shot,” shared PFX executive producer Tomáš Srovnal. “We scouted the planned stadium locations, filmed a lot of footage and started testing. It became clear very early on that we would find common ground with the filmmakers – they knew what they wanted, and we knew how to make it happen. Our cooperation was very intense and took the form of a very satisfying creative dialogue from the get-go.”

“When I first spoke with Jindřich Červenka (VFX supervisor at PFX) on the topic of stadiums, I mentioned the film Bohemian Rhapsody,” noted the film’s director David Ondříček. “His response was, ‘I hope it won’t look as bad as that.’ So, I said to myself, if this post-production studio is that confident, I must be in the right place. And now that I see the results, it really does look a lot better.” Červenka noted that the project was unique due to the extent of VFX required. He spent 38 out of the entire 54 shooting days on set. “The half-dilapidated Brno stadium Za Lužánkami’ ended up ‘playing’ stadiums in Prague, London, Helsinki and Berlin,” he explained. “Everything that the viewer sees in the stadium shots – with the exception of the racetrack – was created by us. The stadiums had to be recreated as accurately as possible, and so we dug deep into the archives and carefully studied hundreds of old photographs and shots.”

The team set out to create the highest level of realism possible. Rather than opting for a shoot in a studio using a greenscreen, they chose a significantly more complex production method and shot in a real stadium environment with real, natural light and subsequent rotoscoping of the actors.

To make it easier for the filmmakers to envision the overall look of a certain scene, an application was created which instantly prepared a visualization of how the stadium would look. “The application helped me both during scene prep and while shooting, because at any given moment, it allowed everyone on set to have an idea of what would be added in post,” added Ondříček. “This made it possible for us to shoot using the right framing and composition and also allowed us to better instruct the actors to, for example, wave at audience members high up in the stands, as they would otherwise be difficult to visualize.” Some of Zátopek’s races have been very well documented – and Ondříček strove for an accurate depiction of these races to create the most authentic viewer experience possible.

“That’s why it was absolutely essential that everything was shot from the right angles – the complex visualizations at our disposal were a great help in this regard, as we were able to generate them even before production began,” explained Červenka.

But the stadiums couldn’t just stay empty – another key component of the visual effects was the crowd work: adding a digital audience to the scenes. The few hundreds of extras on set had to be transformed into a roaring crowd of over one hundred thousand fans.

During production, 3D scans of extras were created in a studio equipped with 116 cameras. 45 extras were each shot individually wearing three different outfits. This allowed for the generation of over 130 unique 3D scans of characters which were brought to life using motion capture and then planted in the stadium. “Zátopek is a real story about a real person, and this desire for ‘realism’ was reflected in the approach of the entire crew, including our own approach to the color grading,” noted Chudomel. “Our goal was to give viewers a feeling true to the period and the story, while refraining from creating visuals that were overly stylized. It was also crucial to make the film’s rendering of these historic sports grounds as naturalistic as possible, as the world of sports can sometimes be rather rough.”

Zátopek won his first gold medal during the 10k run at the 1948 Olympic Games in London – the race took place during a 40-degree heat wave. “We needed to make sure that the viewer felt the heat too,” added Chudomel.

The footage of the 5k race in London posed another challenge, as the race took place during a heavy downpour – though it was shot in the blazing sun in 35-degree weather. For the entire duration of the production and post-production process, the filmmakers and PFX’s data management teams were at their disposal. With an in-house cinema the team a chance to see how certain scenes translated to the big screen. “For a lot of the long motion shots, I had no idea that it could ever look this good,” commented Ondříček. “I’ve seen the film a countless number of times now, and whenever I watch it, I don’t even notice when something has been added in post. The entire thing looks like it’s been shot in a real environment.”

“David and I had a certain idea in mind of how the film would turn out, but never did we think it would be so exceptional and uncompromising in execution,” shared the film’s producer, Kryštof Mucha. “PFX exceeded our expectations. They helped us immensely with our film.”

“We spent 2 years working on Zátopek here at PFX, and due to the pandemic, we had to wait a pretty long time before we could all watch the film together,” added Srovnal. “When I finally saw the film with other viewers and heard how the audience would collectively hold their breath during the race scenes, I once again felt overjoyed that we were able to take part in the creation of this work. And I was once again reminded of this paradox – we will sometimes pore over certain VFX shots for hundreds or even thousands of hours, but our greatest reward is when the viewer doesn’t even notice our work.” concludes Tomáš Srovnal.