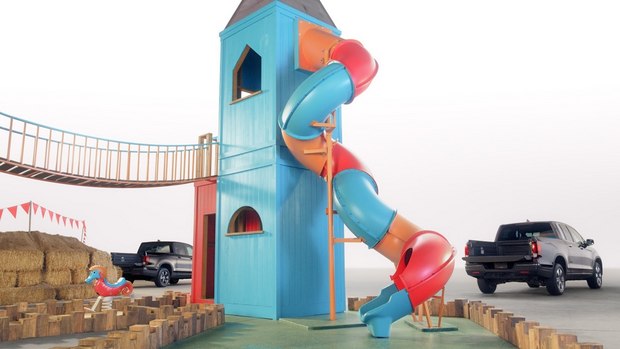 The spot, created almost entirely in-camera, employs an enormous set and long-exposure photography to create a time-lapse feel as a group of “worker bees” create five structures that eventually become the Honda logo.

“The agency wanted to have a time-lapse feel, but not traditional time-lapse as it can be a bit messy, playing out in fits and stops,” the Oscar-nominated director tells It's Nice That. “So it’s not time-lapse, but it draws upon the history of it using long-exposure photography in a stop-motion animation. By shooting each frame over three or four seconds, we’ve created these blurred streaks. As the camera was exposing, the builders had to move through choreographed motions, so it was all planned and controlled -- I wanted it to be more stylized and cleaner than normal time-lapse...for me it was about how we could manipulate these techniques to create a more artfully composed version of traditional time-lapse.”

Entitled “The Power of Ridgeline,” the ad debuted on TV during the Opening Ceremony of the Rio Olympics. It was shot on Stage 30 at Sony Pictures Studios, the legendary Esther Williams stage, where her 700,000-gallon tank lies beneath the floor. Shot almost completely in-camera, the spot is “a mixture of long-exposure photography, stop-motion, live-action, and a dash of CGI,” the director says. “The letters were built at a 30 x 50-foot scale and filmed from the rafters. And yes, we constructed an 800-pound fish bag.”

You can see PES’s previous work for Honda, the Emmy-nominated “Paper,” in the player below: