‘Peppa Pig’ Set for Theatrical Release in the U.K. & Australia 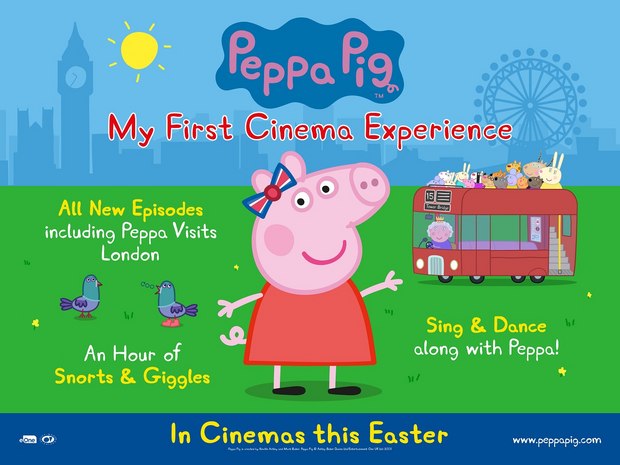 LONDON -- Entertainment One has announced plans for a big screen theatrical outing for Peppa Pig in both Australia and the U.K. on March 16, 2017 and April 7, 2017 respectively. To kick start the marketing campaign and build excitement ahead of the release, eOne has unveiled the first U.K. teaser trailer and film poster.

For Peppa’s latest big screen adventure, eOne has created a new hour-long cinema format entitled “Peppa Pig My First Cinema Experience” specifically for preschoolers. This will offer fans nine all-new Peppa Pig episodes which will be connected with never-before-seen interactive entertainment, featuring live-action Peppa and George characters and their friend Daisy in her colorful new world. Children and parents can join in with games as well as singing and dancing along to new versions of favorite nursery rhymes, including “The Wheels on the Bus” and “Row, Row, Row Your Boat.”

“We’ve had huge demand from fans in the UK and Australia for a Peppa Pig cinema event and we’re all incredibly excited to be bringing fans what we hope will be an unforgettable cinema experience,” said Rebecca Harvey, Head of Marketing at Entertainment One Family. “It’s also a great opportunity for licensees and retailers to capitalise on all the excitement that the cinema release is sure to generate.”

In Australia, the theatrical release of “Peppa Pig My First Cinema Experience: Peppa’s Australian Holiday” will mark the property’s first big screen debut in the country when it premieres on March 16, 2017. The Australian release will be led by a four-part Australian special, which will see Peppa and family head down under on holiday to visit old friend Kylie Kangaroo and will feature the voices of a real Australian family. To promote the film’s release, eOne has partnered with the Australian Tourist Board and Peppa and George costumes have taken part in a promotional photoshoot at Australian landmarks Hickson Bay Wharf Reserve and Taronga Zoo.

Following closely behind the Australian release, “Peppa Pig My First Cinema Experience” will be screened at cinemas nationwide in the U.K. from April 7, 2017, offering family entertainment for both the Easter holidays and May half term. The U.K. release leads with new episode “Peppa Visits London,” where the Queen will make her long-awaited return to Peppa Pig as she takes Peppa and friends on an unforgettable sight-seeing tour around London on a double decker bus. Eight additional episodes will see a trip to the zoo, a cruise along a canal and some advice from the police! The release will include special appearances from new characters including Policeman Panda voiced by David Mitchell and Mrs. Crocodile voiced by Jo Brand.

To coincide with the theatrical release, a collection of London and Australia themed Peppa Pig merchandise will be released at retail in Spring 2017 across categories including toys, accessories and publishing.