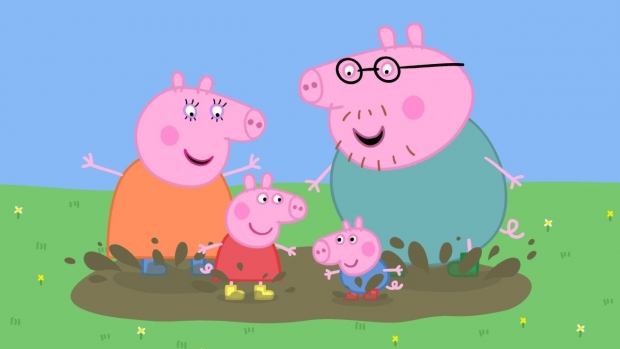 In the episode, Peppa’s classmate Penny Polar Bear, when drawing a family portrait, explains, “I live with my mummy and my other mummy. One mummy is a doctor and one mummy cooks spaghetti. I love spaghetti.”  The episode then shows the two moms and daughter sitting around their kitchen table eating spaghetti.

The decision to include a two-mom family came after an online petition, “Demand a same-sex parent family on Peppa Pig!” garnered nearly 24,000 signatures.

"Children watching Peppa Pig are at an impressionable age and excluding same-sex families will teach them that only families with either a single parent or two parents of different sexes are normal,” wrote the creators of the petition. “This means that children of same-sex parents may feel alienated by Peppa Pig, and that other children may be more likely to bully them, simply through ignorance.”

In a press release eOne Family Brands sent out last year announcing Peppa Pig’s greenlight through 2027, Rebecca Harvey, EVP, stated, “We remain committed to producing fresh Peppa Pig content that will continue to resonate with each new generation.”  It seems they heard the call of the new generation.

Many viewers were delighted to see a same-sex parent family introduced, praising the show for its inclusivity.

“Many of those who watch the show will have two mums or two dads themselves and it will mean a lot to parents and children that their experiences are being represented on such an iconic children’s [program],” Robbie de Santos, director of communications and external affairs at LGBT rights charity Stonewall, told the BBC.

Others, of course, were less thrilled, and one only needs visit Twitter’s #PeppaPig to see the hot debate.

The criticism seems to focus primarily on the fact that Peppa Pig’s target audience is preschool to early elementary children, and some viewers think that is too young to be introduced to the parts of society they view as outliers, or political.

However, as one viewer tweeted, “Modern children will be in classrooms with children who have gay parents. the appropriate time to talk about different family types would be around school age 4-6 so they’re able to better understand their peers in class. That’s Peppa Pig’s audience.”