eOne’s popular animated preschool series will hit Japanese airwaves July 3 on TV Tokyo; Dentsu has signed on as the master CP agent to drive acceleration of licensing for both brands. 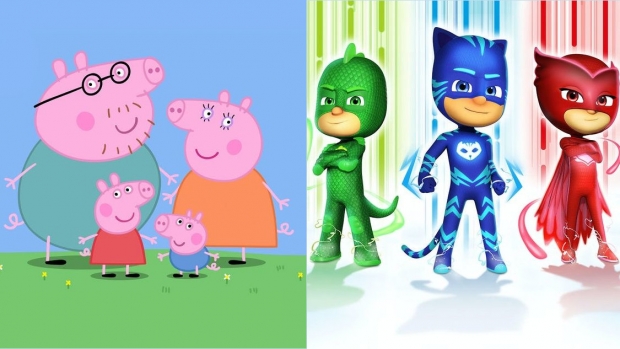 Hasbro’s Entertainment One (eOne) has announced that their popular animated series, Peppa Pig and PJ Masks, are heading to TV Tokyo in Japan. The broadcaster first launched a short version of Peppa Pig on the Kinder TV timeslot in October 2017; they are now looking to build on the growing fanbase by offering of the full version to their preschool audiences on a new weekend timeslot. The broadcast line-up has been further bolstered by additional platforms including Disney Japan and Netflix, which have the rights to the series and have expanded the show’s availability throughout the market

PJ Masks, which follows a dynamic trio of fan-favorites – Catboy, Owlette, and Gekko – on heroic adventures, has been picked up for the first time by a Japanese terrestrial broadcaster. TV TOKYO will broadcast 26 episodes of Season 1.

The Peppa Pig’s consumer products program first debuted in March 2018 via an exclusive pop-up shop in the Takashimaya department store in Tokyo. In 2018, it played an exciting role in the launch of Japan’s first Hamley’s toy store. The Peppa Pig licensing program boasts 33 licensing partners as the brand’s popularity has increased, with more retail partnerships planned in 2021. eOne is accelerating both brands’ licensing drive by collaborating with Dentsu as the master CP agent.

“Peppa Pig is already a global phenomenon, and we are glad to have the show on our channel,” added TV TOKYO’s Sayako Muramatsu and Ryota Kawamura. “We’re also very happy and excited to be able to bring PJ MASKS for the first time to our Free TV audiences in Japan.”

“Peppa Pig and PJ Masks are two of the most iconic pre-school brands in the world and we are so thrilled to be able to have this opportunity to collaborate with eOne and TV Tokyo on bringing these characters to life to a new generation of preschoolers in Japan,” shared DENTSU project leads Kiyofumi Kajiwara and Ayane Kawasaki.

Audiences will be able to enjoy double episodes of Peppa Pig and an episode of PJ Masks every Saturday morning on the “eeny meeny miney mo” slot from 7am to 7:30am from July 3. 2021.