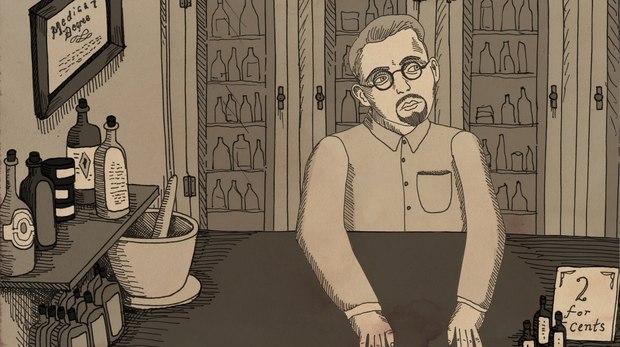 NEW YORK -- Film Forum has announced the U.S. theatrical premiere of NUTS!, beginning Wednesday, June 22. In 1917, J.R. Brinkley, a country doctor practicing in Milford, Kansas, begins treating his male patients for impotence by surgically implanting them with goat glands, a treatment that is so successful that Brinkley starts raising his own goats to meet an increasing demand. Over the years he builds the country’s 4th most powerful radio station (the better to sell his medical miracle), runs for governor of Kansas, and amasses a fortune with which he lives in sumptuous splendor.

Filmmaker Penny Lane writes, “Like Our Nixon, my previous feature-length film, NUTS! is structured as classical tragedy with a complicated and deeply hubristic protagonist, rendered with equal parts comedy and pathos.”

Inventive and wildly fun, NUTS! draws upon a fascinating trove of archival materials and integrates charming animated sequences that, together, bring to life a man who saw himself as more Albert Schweitzer than P.T. Barnum, but who ultimately turns out to be an unholy mix of Bernie Madoff and Donald Trump.