Collection of animated crossings in color motion by Bay Area artists Emily Alden Foster, Mel Prest and Leah Rosenberg will be on view 24/7 September 21 through November 1. 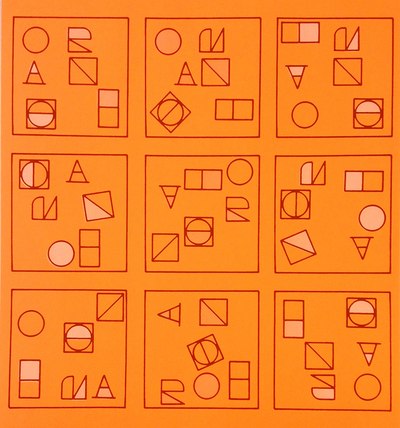 The Peephole Cinema has announced a new show, Orange on Orange, a collection of animated crossings in color motion by Bay Area artists Emily Alden Foster, Mel Prest and Leah Rosenberg. The exhibit is on view 24 hours a day, seven days a week, from September 21st through November 1st at 280 Orange Alley (off of 26th near Valencia). Kicking off the exhibition is an opening reception on Saturday, September 26th, 2:00-4:00 p.m.

Peephole Cinema was founded by Laurie O’Brien in 2013 and is part of a miniature cinema collective with satellite projects in three cities: San Francisco, Brooklyn, and Los Angeles. In each location, silent film shorts are screened 24/7 through a dime-sized peephole installed in a public location. New film programs are rotated into the cinema every six weeks.

Emily Alden Foster incorporates a wide variety of materials and processes into her animated, live action videos and Zines. In Watercolor Animation Experiment #1 she paints tiny blue watercolors of dashes, blobs, dots and squiggles and then animates them to find their natural rhythm. The piece is an investigation for an upcoming animation to be expanded into many more colors and forms. Foster has been making animations since the first day she owned a digital camera. Foster has shown her animations in This Will Never Work at Southern Exposure (San Francisco), Stop & Go: Made From Scratch (touring), Animated Type Showcase (Portland) and Art of Letterpress II at The Compound Gallery (Oakland). She also runs Womanzine Delivery Service and helps to organize the San Francisco Zine Fest.

Mel Prest is a non-objective painter whose work is focused on color and perceptual visual relationships. The inherent systems she creates in her work are intuitive and in colors she extracts her work from observation and accidents. In Untitled (Orange) she works with shapes and gradients to explore our perception of the color Orange and the afterimages of 2D and 3D. Prest is an artist, curator and educator living and working in San Francisco and occasionally in New York. Recent solo shows include: COLOR CHANT at Chandra Cerrito Contemporary (Oakland), MoonBrightChime at Galleri Urbane (Dallas), ZeppelinMetroMashup at B Sakata Garo (Sacramento). Prest has been awarded artist residencies at Ragdale, The Sam and Adele Golden Artist Foundation, Willapa Bay AiR, The Wassaic Project and Vermont Studio Center, among others.

Leah Rosenberg makes paintings, paint-based sculptures, and cakes. Her process combines systems of accrual and layering techniques by way of color and stripes, to explore how our experiences and memories literally pile up. Her stripe paintings, prismatic sculptures and thematic cakes all aspire to delight our senses through a combination of every color, every day. In Oranges, Leah merges her interests in color and flavor by selecting items we consume and painting swatches of orange in attempting to match it to a paint color, piling up the arrangement until it fills the screen or falls apart. Rosenberg moved to San Francisco from Canada to pursue her MFA at the California College of Art, where she wrote her thesis on the artistic possibilities of cake. She worked as the lead pastry chef for the rooftop coffee bar at SFMOMA where she applied her love of art, artists and cake-making to dream up desserts celebrating the museum’s work. Recent exhibitions include Happiness Is... at the Montalvo Arts Center (Saratoga), Pairings at Galleri Urbane (Dallas) and Bay Area Now 7 at Yerba Buena Center for the Arts (San Francisco).

Orange on Orange is curated by Sarah Klein, a San Francisco Bay Area artist, curator and educator. She is the co-organizer of the Croatian Animation Cultural Exchange and has curated for Root Division Gallery, (San Francisco), Rhodes & Fletcher (San Francisco) and the Present Group’s Art Micro Patronage (online). Recently she co-curated Doppler Extended Play: A Program of Time-Based Art for the New Jersey Center for Visual Art (Summit). In 2008 she began curating the animation program Stop & Go that features stop-motion works by visual artists and filmmakers. Currently she is touring the fourth installment of the show called Stop & Go: Made From Scratch.