The limited series about the Tiger King, Joe ‘Exotic,’ uses cruelty-free computer-generated imagery instead of real tigers; produced by Universal Content Productions and starring Kate McKinnon, the show is now streaming on Peacock. 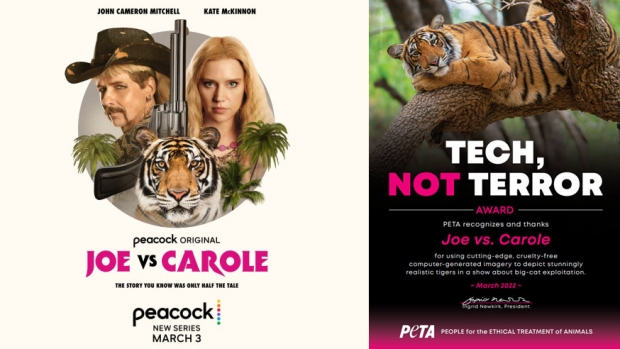 The creators and studio behind Peacock’s new original limited series Joe vs. Carole used cutting-edge, cruelty-free computer-generated imagery (CGI) instead of real tigers or other exotic animals, and People for the Ethical Treatment of Animals (PETA) have taken note. The production has just earned a “Tech, Not Terror” Award from the animal advocacy organization.

Joe vs. Carole is a scripted adaptation of the 2019 Wondery podcast Joe Exotic: Tiger King, hosted and reported by Robert Moor. The limited series centers on Carole Baskin, a big cat enthusiast, who learns that fellow exotic animal lover Joe “Exotic” Schreibvogel is breeding and using his big cats for profit. She sets out to shut down his venture, inciting a quickly escalating rivalry. But Carole has a checkered past of her own and when the claws come out, Joe will stop at nothing to expose what he sees as her hypocrisy.

When the series was first announced, PETA sent letters to Joe vs. Carole star Kate McKinnon and the show’s production company, Universal Content Productions, pointing out that wild animals suffer when used for entertainment, whether by roadside zoo operators like those featured in Tiger King or by trainers for the film and TV industry.

“Big cats don’t deserve to suffer for TV any more than they deserve to suffer at shoddy roadside zoos like those in Tiger King, and using CGI can help audiences make that connection,” commented PETA Senior Vice President Lisa Lange. “While we’d hope that tigers wouldn’t be exploited for a story about wild-animal abuse, PETA is happy to celebrate Joe vs. Carole for leaving tigers in peace and urges all productions to opt for tech, not terror, to depict wild animals.”

According to PETA, when used for film and television, tigers and other wild animals are routinely separated from their mothers prematurely, denying them the maternal care that they need for normal development; condemned to a life of deprivation; and forced to perform under the threat of a whip or other weapons. Because wild animals are exactly that - wild - no amount of training can ever completely override their natural instincts, making them extremely dangerous.

PETA - whose motto reads, in part, that “animals are not ours to use for entertainment” -- opposes speciesism, a human-supremacist worldview. For more information, please visit AnimalsInFilmAndTV.com or follow PETA on Twitter, Facebook, and Instagram.