The final season of DreamWorks Animation’s original CG animated series, about Viking twins Dak and Leyla and their exciting adventures, comes to the streamer this month. 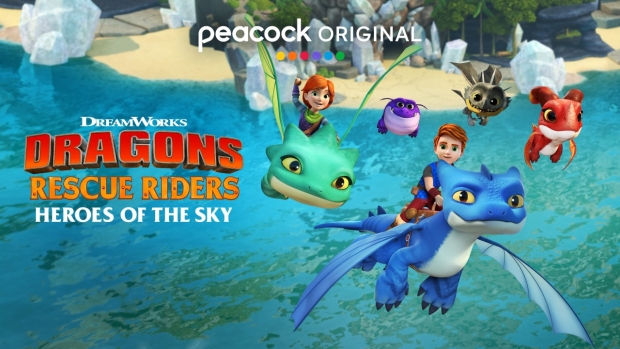 Get ready for the fourth and final season of DreamWorks Animation’s Dragons Rescue Riders: Heroes of The Sky. Check out the Season 4 trailer and key art (below) for a glimpse of the new six-episode season debuting on Peacock September 29. Set in a faraway corner of the Viking and Dragon world, the series follows Viking twins Dak and Leyla, who, rescued and raised by dragons, grow up learning to speak the dragon language.

In the new season, the Rescue Riders are back with new adventures as they help Magnus reclaim his workshop from a group of baby metal-eating Razortooth Metalmaw dragons before they eat him out of house and home… literally. Dak, Winger, Aggro, and Burple find themselves dueling with a mischievous Copyclae dragon who can impersonate both their voices and powers. But when a dragon whose blast wipes out memories attacks Dak and Layla, it’s up to their dragon friends to bring their memories back before the twins forget they were “Rescue Riders” forever.