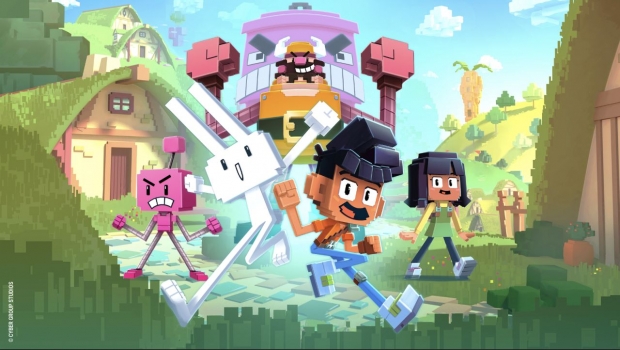 The streamer previously greenlit the make-and-do series The Makery and released Season 1 of the musical dance jamboree series, Babble Bop! Other Peacock Originals currently in the kids space include Curious George: Cape Ahoy, as well as the DreamWorks Animation series Archibald’s Next Big Thing Is Here!, Cleopatra In Space, Where’s Waldo?, and Dragons Rescue Riders: Heroes Of The Sky.

Megamind’s Guide to Defending Your City

The CG animated series follows-up the hit movie, where Megamind goes from being a supervillain and the scourge of Metro City to a superhero who's learning on the job. He'll be bringing the audience along for the ride, as Megamind's trusty brainbots will be recording everything, making him the world's first superhero influencer.

Alan Schoolcraft and Brent Simons, who wrote the 2010 feature, are executive producing the series alongside Eric Fogel. The co-executive producer and story editor is JD Ryznar; the series is produced by DreamWorks Animation. The CG animated musical dance jamboree series for preschoolers is a foot-tapping, handclapping, baby-bottom wiggling, sing-along world of music, dance, and preschool play. With a mix of new takes on classic nursery rhymes and original songs, this inclusive short-form series targets the social and emotional learning for the pre-k set.

Heroes Lily, Hugo, Miguel, Izzie, and Sam will play the day away movin’ and boppin’ and havin’ a ball to awesome, catchy, repeatable - and sometimes very familiar – songs. With new characters animals and brand-new song styles the second season continues to hold up a magnifying glass to the little things in their life: having a snack, dressing up, drawing with crayons, watching the clouds, or playfully helping their parents (who are always around if not on camera) as best they can.

Dan Fill and Raja Khanna serve as executive producers with Christine Thompson producing. Co-directed by Luke Jurevicius and Tim D.P. Thompson, and written by Katherine Stanford, the show is produced by Dark Slope.

In the animated comedy-adventure mash-up, Sunny and his sister Rue are all about the exciting, fast-paced world of “24 KARAT QUEST” video game. Athletic, brave, and funny, Super Rabbit Boy is the hero of this fantastical Game-World. When the siblings end up able to play IN the game, their life is flipped upside down.

Press Start! is based on the best-selling and award-winning Scholastic book series, “Press Start!” and is produced by Cyber Groups Studios.

The lead characters are of East Indian heritage, which will be reflected in the storytelling, the diverse make-up of the writers’ room, and the inclusion of other talent participating in the series.

Climb in! Power up! Save the day! In the series four animal-loving kids from around the world use their tech skills to create giant Mekbots – each inspired by a different animal. In every adventure, the kids save animals all over the globe and show that teamwork, environmental smarts, and compassion make you a hero. Oh, and robotic animal powers help too!

Mateo, Kawhi, Mei-Lin and Frost drive the Mekbots. Each Mekbot is a gigantic, stomping mech, styled after an animal. Once the kids are inside, their movements become the Mekbots’ movements, right down to the facial expressions!

The CG animated preschool series inspires kids to see the outsized good they can do in the world, and how they can be a HUGE help to all living things! The series is set in a vivid, hyper-realistic land inhabited by ferocious – and often silly – dinosaurs. While the landscape and dinosaurs may be prehistoric, modern elements familiar to kids, from ice cream cones to race cars, will burst onto the scene and delight viewers. Dino Pops delivers engaging and easy-to-digest bursts of dinosaur-related information aimed at preschool-aged children.

Every episode highlights different dinosaurs and delves into their traits and attributes. From T-rex to Triceratops, Raptors to Titanosaurs, the secrets of the inhabitants of a different world will be revealed in hyper realist animation with a twist that makes it a perfect bite sized morsel of funtainment.

Renowned Argentinian Paleontologist Dr. Diego Pol served as a consultant for all dinosaur information and facts. He and his team have discovered fossils of over 20 new species of dinosaurs, including the Bagualia alba. This ten-ton, forty-foot-long, with a ten-foot neck dinosaur, roamed the wilds of Patagonia 179 million years ago and will be making its TV debut on Dino Pops.

Abominable and the Invisible City

The CG animated comedy adventure series continues the wild and woolly fun of DreamWorks Animation's Abominable. Everest the yeti, Yi, Jin, and Peng know that there’s a whole magical world out there, and now it’s even closer than they think! When they discover that their surroundings are teeming with magical creatures in need of their help, the kids will set out on extraordinary and heartfelt adventures throughout their city and beyond.