New two-part, four-hour documentary, ‘American Experience: Walt Disney,’ offering an unprecedented look at the life and legacy of one of America's most enduring and influential storytellers, premieres September 14-15. 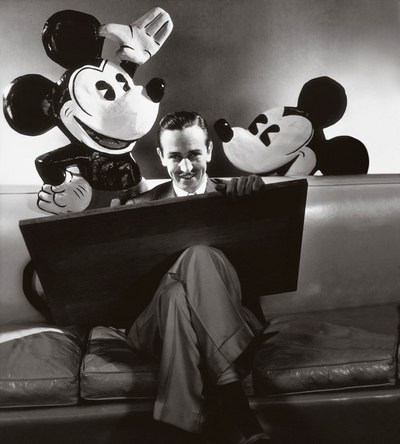 BOSTON, MA -- In 1966, the year Walt Disney died, 240 million people saw a Disney movie, 100 million tuned in to a Disney television program, 80 million bought Disney merchandise, and close to seven million visited Disneyland. Few creative figures before or since have held such a long-lasting place in American life and popular culture.

American Experience offers an unprecedented look at the life and legacy of one of America's most enduring and influential storytellers in Walt Disney, a new two-part, four-hour film premiering Monday and Tuesday, September 14-15, 2015, 9:00-11:00 p.m. ET on PBS (check local listings). Executive produced by Mark Samels, directed and produced by Sarah Colt, and written by Mark Zwonitzer, the film features rare archival footage from the Disney vaults, scenes from some of his greatest films, and interviews with biographers and historians, animators and artists who worked on Snow White and other early films, and designers who helped create Disneyland.

From Steamboat Willie to Pinocchio to Mary Poppins, Disney's movies grew out of his own life experiences. He told stories of outsiders struggling for acceptance and belonging, while questioning the conventions of class and authority. As Disney rose to prominence and gained financial security, his work became increasingly celebratory of the American way of life that made his unlikely success possible.

Yet despite the success he achieved, he was driven and restless, a demanding perfectionist on whom decades of relentless work and chain-smoking would take their toll. He wanted his films to make people feel deeply, yet often buried his own emotions. Aspiring to create great artistic films, he felt he wasn't taken seriously by the movie industry, and was stung when critics panned his productions. Never satisfied with his previous efforts, he always pushed forward to a “new adventure,” but his attention to detail and quest for innovation frequently meant delays and cost overruns. When his employees organized and went on strike, Disney felt betrayed, not able to understand how people who worked for him could be unhappy; years later he called them “communists” before the House Un-American Activities Committee.

A polarizing figure -- though true believers vastly outnumber his critics -- Disney's achievements are indisputable. He created one of the most beloved cartoon characters in history, Mickey Mouse; conceived the first ever feature-length animated film, Snow White and the Seven Dwarfs; pioneered the integration of media and marketing with thousands of branded products; and conceived Disneyland, the world's first theme park and a three-dimensional realization of his own utopian universe.