Special marathon kicks off February 16 featuring 250 back-to-back episodes and movie specials; GBH Kids to expand content with Podcast, Topical Shorts, and Games rolling out in 2022 and beyond. 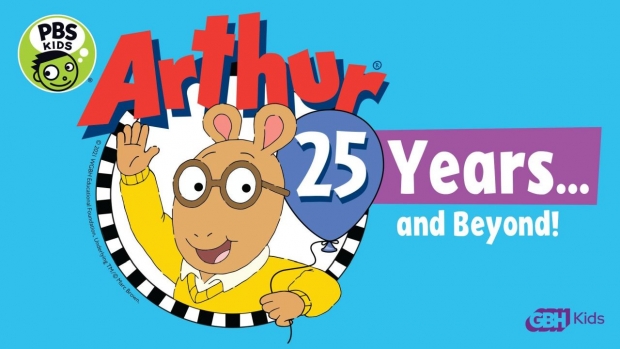 The iconic Peabody and Emmy Award-winning series based on the bestselling books by Marc Brown, Arthur, is turning 25. PBS KIDS and GBH Kids are celebrating the milestone with a special marathon that includes four new episodes with an ending that will give fans a peek at what the future holds for the show’s beloved characters.

The marathon will feature more than 250 episodes and movie specials back-to-back on the PBS KIDS 24/7 channel and livestream, as well as on the PBS KIDS YouTube channel beginning February 16 at 9:00 a.m. EST, running through February 21 at 5:00 p.m. EST. The four new episodes will air on PBS stations (check local listings) and stream free on PBS KIDS on February 21, concluding the show’s 25th and final television season.

New content from Arthur will continue rolling out in 2022 and beyond, including a podcast, video shorts and digital games. The 25 seasons of Arthur (250+ episodes) will continue to be available on PBS KIDS.

“For more than 25 years, Arthur and his friends have kept viewers learning and growing through their true-to-life experiences,” noted PBS KIDS senior vice president and general manager Sara DeWitt. “We can’t wait to debut these episodes and introduce new Arthur content that will give fans more ways to engage with their favorite aardvark.”

The longest-running kids’ animated series on television, Arthur is known for teaching kindness, empathy, and inclusion through everyday adventures and many groundbreaking moments. In the new episodes, Arthur and his friends solve a mystery, see a silent movie, find out what it’s like to be a reporter, learn how to help a grieving friend, go on a family vacation, and get a hint of their futures from a mysterious fortune-telling game.

“It’s been a privilege to work with an extraordinary and talented team to bring to Arthur to public television audiences for more than two decades,” shared GBH Kids senior executive producer Carol Greenwald. “We’re excited about Arthur’s next chapter – sharing the stories and experiences of Arthur and his Elwood City community to the media platforms where the next generation of kids and families will connect with them for years to come.”

Marc Brown, the author of the "Arthur Adventure" book series, which has sold more than 65 million copies in the U.S. alone, is also releasing a new book, "Believe in Yourself: What We Learned from Arthur" (Little, Brown Books for Young Readers), on January 25, 2022.

“It’s amazing that what began as a simple bedtime story for my son eventually evolved into over a hundred books and a collaboration with GBH and PBS KIDS that would last 25 years,” remarked Marc Brown the creator and author of ARTHUR. “Now more than ever the last line of my first book Arthur’s Nose rings true- ‘There is a lot more to Arthur than his nose.’”

Arthur has tackled many important, timely topics. In 2020, GBH Kids created a series of digital short videos to give parents and families tools to talk about current events – including the importance of handwashing and wearing a mask; talking about racism; and encouraging everyone to participate in elections. Over the next several years, the team will produce additional new shorts to address timely topics families will be facing as well as everyday Elwood City adventures.

GBH KIDS will create new Arthur content for other platforms including a podcast in collaboration with Gen-Z Media. The programming will leverage the franchise’s library of stories, favorite characters, and heartfelt moments. It will be available on podcast streaming platforms and on pbskids.org.