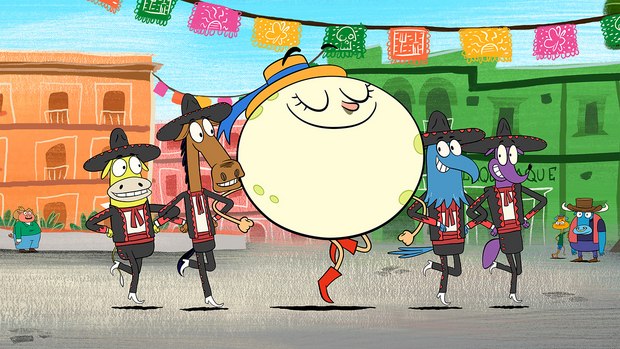 Let’s Go Luna! follows the adventures of a wombat from Australia, a butterfly from Mexico and a frog from the U.S. as they traverse the globe with their parents’ traveling performance troupe, “Circo Fabuloso.” At each stop, Luna the Moon, voiced by Judy Greer, guides the trio as they get to know the local region and its people. Let’s Go Luna! will encourage kids ages 4-7 to explore and appreciate cultures worldwide, and build global citizenship and social skills.

Molly of Denali will debut nationwide in summer 2019 on PBS stations, the 24/7 PBS KIDS channel and PBS KIDS digital platforms.

‘Molly of Denali,’ which premieres next summer on PBS Kids, is about the adventures of an Alaska Native girl.

Molly helps her mom and dad run the Denali Trading Post, a general store, bunkhouse, and transport hub in the fictional village of Qyah, Alaska. Each episode follows Molly, her dog Suki and her friends Tooey and Trini on their daily adventures in Alaska, from fishing to building snow forts to delivering a camera to friends on a volcano via dog sled.

The series is designed to help kids ages 4-8 develop knowledge and skills for interacting with informational texts through video content, interactive games, and real-world activities. Each episode will include two 11-minute stories as well as interstitial content, including live-action segments featuring real children and regions in Alaska.

The series is  in production on 38 half-hour episodes and a one-hour special. The series is co-produced by WGBH and Atomic Cartoons. Molly of Denali is developed and produced with funding from CPB, the Department of Education’s Ready to Learn Grant, and CBC.