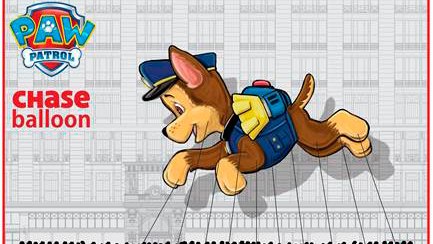 A giant balloon of Chase from Nick’s ‘PAW Patrol’ series will appear in the Macy’s Thanksgiving Day Parade.

NEW YORK -- The 91st annual Macy’s Thanksgiving Day Parade will bring a paw-some pup and genie magic to New York City with the debut of a brand-new PAW Patrol character balloon and Shimmer and Shine float, based on the hit preschool series.

Heroic rescue pup Chase from the animated series PAW Patrol, produced by Spin Master Entertainment and broadcast on Nickelodeon, will soar through the New York City skies for the first time as a high-flying giant balloon. In addition, the vibrant Shimmer and Shine float will bring the magical genie land of Zahramay Falls and the beloved characters Shimmer and Shine to life for more than 3.5 million spectators lining the route and more than 50 million viewers nationwide.

The Shimmer and Shine animated float features unique elements from their magical world including the palace, marketplace, rainbow waterfall with mist, dazzling gems and jewels, and inflatable clouds. The float will also showcase characters from the show including: Shimmer and Shine’s best friend Leah and her pet Parisa; playful pets Nahal and Tala; and the scheming sorceress Zeta peeking out from her lair.

The 91st annual Macy’s Thanksgiving Day Parade airs nationwide on NBC-TV, on Nov. 23 from 9 a.m. to noon in all time zones.