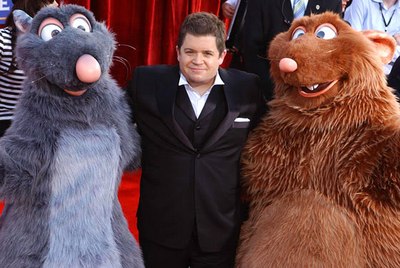 “I certainly hope Boyhood gets recognized for its amazing CGI aging effects!” said Oswalt as he starts preparing for his return engagement

Oswalt continues to find success in all areas of entertainment, from his Grammy-nominated comedy specials to his many memorable TV guest roles (including Parks and Recreation, for which he received a TV Critics Choice Award) and narrator on ABC’s breakout comedy The Goldbergs, in addition to recent roles in The Secret Life of Walter Mitty and Adult Swim’s The Heart, She Holler. In 2013, Oswalt was nominated for a Critics Choice Award for his performance in Young Adult and previously earned a Gotham Award nomination for his performance in Big Fan.

Funnyman Oswalt has shot five TV specials, including his latest Tragedy Plus Comedy Equals Time, which debuted on EPIX, to add to his four critically acclaimed albums, including the Grammy-nominated albums Finest Hour (2012) and My Weakness is Strong (2009). He provided the unforgettable voice for Remy, the rat in Pixar’s Oscar winner Ratatouille, and has voiced characters on The Simpsons, Bob’s Burgers, Word Girl and Neighbors from Hell. Oswalt’s impressive roster of guest starring and recurring roles include appearances on United States of Tara, Justified, Burn Notice, Bored to Death, Flight of the Concords, Sarah Silverman Show and Real Time with Bill Maher.

Oswalt tours extensively, headlining both in the United States and UK, and is a regular at music festivals like Bumbershoot, Bonnaroo, Comic-Con and Coachella. He also has a regular, bi-monthly show at the new Largo at the Coronet Theater in Los Angeles. Oswalt’s first published book Zombie Spaceship Wasteland was released in January 2011 and is a New York Times Best Seller. His second book, Silver Screen Fiend, will hit shelves January 6th, 2015.

“Patton Oswalt is an amazing and generous man”, said Jeffrey A. Okun, VES Chair, “His timing, wit, recognition and love of VFX make him our repeat choice for master of ceremonies.  We count ourselves so lucky that he loves our show and our art!”

As previously announced: The Visionary Award will be presented to acclaimed director-producer-writer-composer J.J. Abrams in recognition of his enormous contributions to filmed entertainment.