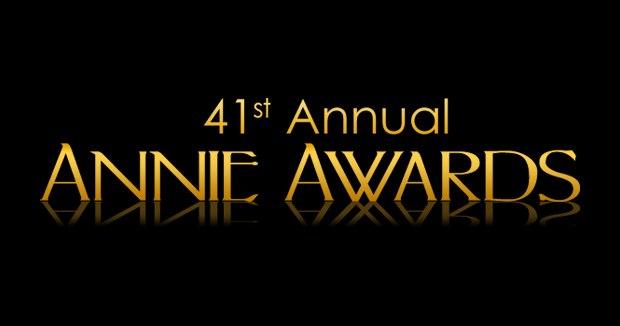 “The Annie Awards is our major event each year and it seems that its profile keeps rising along with the widening influence of animation,” says ASIFA-Hollywood President, Frank Gladstone. “I love the event and look forward each year to the fun and surprises that the awards always deliver.”

Follow us the evening of the event at: http://annieawards.org/watch-it-live/.  Live streaming begins at 7 p.m. PST.

VIP Tickets are sold out, but General Admission tickets ($30) for the ceremony only can be purchased directly through the UCLA Ticket Box office at 310.825.2101 or online at www.uclalive.org or www.ticketmaster.com. For up-to-the minute details on the 41st Annual Annie Awards, please visit www.annieawards.org.

Often a predictor of the annual Academy Award for Best Animated Feature, the Annie Awards honor overall excellence as well as individual achievement in a total of 30 categories ranging from best feature, production design, character animation, and effects animation to storyboarding, writing, music, editing and voice acting.  Entries submitted for consideration were from productions that originally aired, were exhibited in an animation festival or commercially released between January 1 and December 31, 2013.

ASIFA-Hollywood is the world’s first and foremost professional organization dedicated to promoting the Art of Animation and celebrating the people who create it. Today, ASIFA-Hollywood, the largest chapter of the international organization ASIFA, supports a range of animation activities and preservation efforts through its membership. Current initiatives include the Animation Archive, animation film preservation, special events, classes and screenings.

Created in 1972 by veteran voice talent June Foray, the Annie Awards have grown in scope and stature for the past four decades.